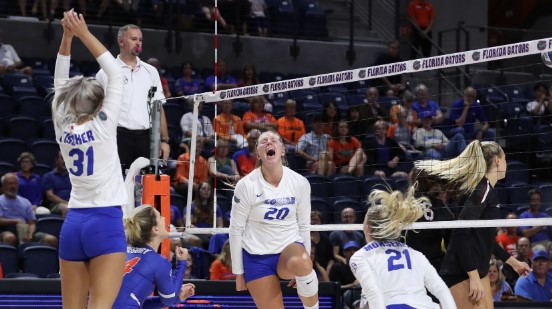 Florida Gators volleyball got the win Sunday afternoon, but Tennessee made them earn it.

The 13th-ranked Gators defeated the Lady Volunteers 3-1 in the Exactech Arena at the Stephen C. O’Connell Center for their sixth straight victory.

Finished out the weekend with another W at home!

“We were successful today because of some really good hitting choices made by our players,” head coach Mary Wise said. “To be able to hit over .300 against an excellent defensive team in Tennessee speaks highly to that part of the game.”

Gators Fill Up the Stat Sheet

Those 13 kills for Kramer are the most she’s put up in a match since Oct. 6 against Kentucky. That Kentucky match was also the last time she posted double-digit kills this season.

A quartet of Gators also posted 10+ digs on the match. Libero Allie Gregory and setter Marlie Monserez led the way with 18 apiece while Hammons and Hall posted 11.

ICYMI: Catch up with @paige_hammons after today's 3-1 win over Tennessee! #GoGators pic.twitter.com/ClXhdWvKOq

Here are the stat lines for some of these Gator players:

Hammons’s 15 and 11 on Sunday is just her second double-double of the year while Hall’s 13 and 11 gives her nine.

Wise Happy with the Win

Wise said postmatch she was pleased with many things her team did. But she couldn’t express enough how grateful she was to be done with facing a team like Tennessee for the year.

Wise on the Lady Vols:

The defensive efforts of Gregory and Monserez stuck out to her. Gregory passed Jenny Manz for eighth all-time in career digs with 1,205 thanks to her performance on Sunday and Monserez’s 18 digs are a new career-high.

“That’s what was required to play such an offensive juggernaut in Tennessee,” Wise said.

The Gators are back on the road for a Wednesday match against the 25th-ranked team in the land in the Missouri Tigers. That game will be live from Columbia at 9 p.m. ET.