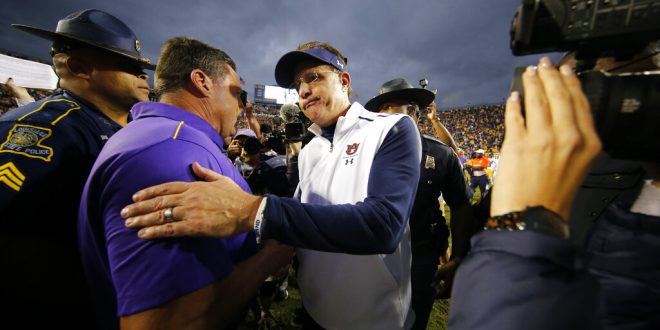 Louisiana State University just bumped Alabama out of the No. 1 spot in college football. LSU grabbed the top spot after their 23-20 win over No. 11 Auburn. The Tigers narrowly beat out Alabama by just two points, 1,476 for LSU to Alabama’s 1,474.

POLL ALERT: LSU jumps to No. 1 in AP Top 25 presented by @askRegions, just 2 points ahead of Alabama; Ohio State, Clemson, Penn State round out top five.

The Tigers have been steamrolling the top 25 poll, beating several high-profile teams. Their stake in the No. 1 spot has always been valid, but their victory on Sunday solidified their efforts. But, with the rankings being so close, does LSU deserve the top spot? It may be too early to tell. Both teams have a bye week right now, and there’s still plenty of games to be played. Ohio State is right on the heels of the top two teams, wrangling a respectable 1,468 points in the poll.

Ohio State remains No. 3 but is only eight points behind new No. 1 LSU in the latest Associated Press poll. According to @ralphDrussoAP, it's the closest No. 3 has been to No. 1 since voting format was changed in 1978. https://t.co/Ml6OYcApcm

Some important things should be taken away from LSU’s victory over Auburn. Defensively, this game was a good ego boost for LSU’s defense, who sacked Bo Nix 3 times. However, LSU is still tending to lack in the red zone on the road, only converting 56.25% of their touchdown attempts. The Tigers have pushed through it in recent games, but Alabama isn’t like every other team.

Speaking of ‘Bama, it seems that LSU players have been avoiding talk of their biggest opponent this season, most likely avoiding a jinx, but that seems to have changed. LSU defensive lineman Rashard Lawrence said, ”We live for the big moment.” when asked how his team will go about these next couple weeks.

Your Tigers are No. 1️⃣ in the @AP_Top25 entering the bye week! #LSU
Polls: https://t.co/C2VzmxBrCt pic.twitter.com/rsxP7PegkI

As for all the Alabama fans out there, don’t be too upset, because in just two weeks, these two powerhouse teams will duke it out in Tuscaloosa to be crowned the winner. Nick Saban said it best himself, “It doesn’t matter what you’re ranked until the end.”