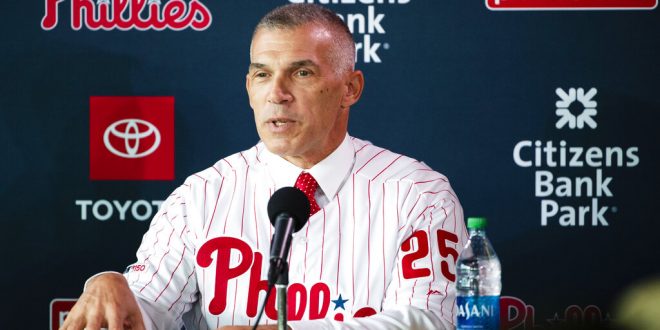 The Philadelphia Phillies had an unfortunate run with an 81-81 record under former manager Gabe Kapler. He was fired on Oct. 10, leaving the Phillies on the hunt for a new team manager. In a press conference on Monday, the team announced that Joe Girardi would take on the role.

Joe Girardi puts on the Phillies uniform for the first time.

Girardi left the New York Yankees back in 2017, but not after a successful run. He led the team to a title in the 2009 World Series. The irony is that they beat the Phillies to win the series in six games. He also assisted the team in making six playoff appearances. He announced he was leaving the team just days after a loss against the Houston Astros in Game 7 of the American League Championship series.

He spent 10 season as manager with the Yankees and only one with the Florida Marlins prior. Back in 2006 when he was with the Marlins, he was named National League Manager of the year.

In the press conference, Girardi expressed his excitement in joining the team. He also shouted out the dedicated fans and staff of the Phillies franchise.

When he was in New York, Girardi had future Hall of Famers like Derek Jeter, Jorge Posada, CC Sabathia and Mariano Rivera to build a lineup and pitching staff around. He is given a similar deck with the Phillies.

The Phillies were big spenders ahead of the 2019 season. They locked up All-Stars Bryce Harper and JT Realmuto to go alongside ace pitcher Aaron Nola. These signings didn’t equal the result many fans and experts were hoping for. Many believed this team would be still playing. However, with the new leadership of Girardi, the future is looking up for the Phillies in 2020.

Phillies fans are hoping the 2020 season goes a lot smoother under Girardi. The season will kick off in March with a four game series in Miami, against the team Girardi managed in his first managerial job.

Sara Dastgerdi is a current student at the University of Florida.
Previous Should Dan Quinn Stay or Move On?
Next Grantham talks UGA ahead of big game