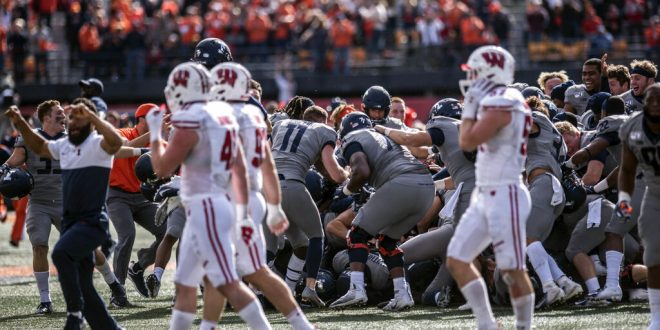 Badgers have their hands full on the road against unbeaten Buckeyes

The Wisconsin Badgers were ranked 6th going into their match-up against unranked Illinois last week with a great bid to make the College Football Playoffs. But Illinois didn’t let them off easy.

In fact, the Badgers came out ranked just 13th after the Fighting Illini upset them at home. But the loss wasn’t all on the players.

The Badgers were on the goal line last week against Illinois and didn’t go to one of the nation’s leading rushers for the score, and it cost them. Jonathan Taylor had 28 carries, 132 yards, and a touchdown last week, but it could have been two touchdowns.

"One of the best players in the country… in any position"

Jonathan Taylor is the Badgers’ number one running back, and he’s third in the nation in yards with 957. He’s also got 15 touchdowns on the season, which is tied for first in the nation. Needless to say, he’s a goal-line threat. But Wisconsin Head Coach Paul Chryst didn’t think so, as he trusted in his offensive line and secondary backs to power the ball in and give them a 13 point lead with a successful extra point.

Instead, they missed three chances to potentially ice the game and had to settle for a field goal which put them up nine. This cost them big soon after as the Fighting Illini capitalized on a rare fumble by Jonathan Taylor, his first of the year.

Despite this fumble, which ultimately gave Illinois the chance to win, Taylor needs to be trusted if the Badgers are going to upset the Buckeyes this weekend.

Even after a gut-punch of a loss, Wisconsin Head Coach Paul Chryst is confident in his guy’s ability to turn the page:

It’s do or die for the Badgers, as they essentially ended their college playoff hopes with their loss to Illinois last week. With their backs against the wall, they have to beat an incredibly tough team in Columbus Ohio, a difficult place to play even without the third-best team in College Football on the field.

In order to win, they’ll need big performances from their offense, in particular, Jack Coan and Jonathan Taylor. They will need a balanced attack against a strong Buckeyes defense. If last week is any indication, they can trust their QB to get the ball to his receivers.

Wisconsin QB Jack Coan played a solid game against Illinois, throwing for 264 yards, a touchdown and an interception on 24 of 32 completions. The interception is a blemish, but #6 Tony Adams made an incredible play on the throw from Coan.

Wisconsin may be unwavering as they prepare for Ohio State, but will it be enough?

While the Badgers have a great running back, the Buckeyes have one with a similar number of rushing yards. That back is J.K. Dobbins, and he has 947 rushing yards on the season, with just 7 touchdowns.

That’s no slight to Dobbins, that just shows how great Jonathan Taylor is.

That said, neither Coan nor Fields have played defenses like Wisconsin’s or Ohio State’s. That’s because they are the two best defenses in the country.

While both teams’ offenses are great, it is their defenses that steal the show. Even with the upset last week, Wisconsin is the best passing and rushing defense in the league.

Wisconsin’s defense allows the least yards in the league, and Ohio State’s allows the second least, 30 yards more to be specific.

The Badgers’ defense allows just 7.6 points per game, with the Buckeyes right on their tails with 8 points allowed. These defenses are ready, and the Buckeyes are set to defend their home-field advantage.

Ohio State’s defense has 29 sacks, which is tied for second in College Football, but Wisconsin is only two behind. Both teams are poised to fight it out to the last second.

Ohio State Head Coach Ryan Day knows this will be the best match-up of the year for his team:

Ohio State is ready, but so is Wisconsin. The Badgers will look to shock the College Football world and get themselves back in the playoffs, and their defense will be the biggest key if that’s going to happen.

Watch these story-lines and more at kickoff tomorrow at 12 p.m.

My name is Caleb Mikita, and I am a telecommunications major at the University of Florida from St. Pete, FL. I am a fan of all things sports, but my main passion is baseball. My long term goal is to become a sports analyst or writer for MLB Network.
@@caleb_mikita8
Previous Oak Hall looks to build momentum against Quincy Munroe as playoffs approach
Next 49ers Remain Undefeated After Beating the Cardinals