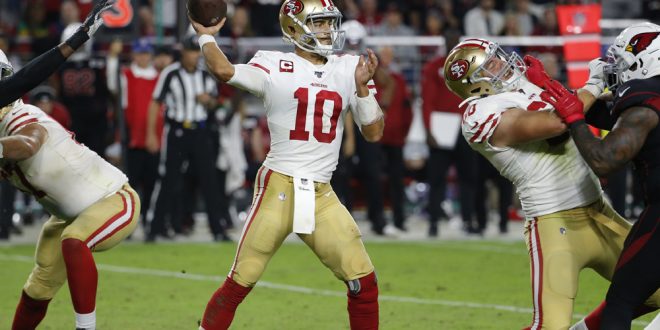 The San Francisco 49ers (8-0) did not waiver on Thursday Night Football against the Arizona Cardinals (3-5-1). They are one of two teams who remain undefeated in the 2019 season.

49ers Are Halfway There

With Week 9 marking the halfway point for the NFL season, the 49ers still have a long road ahead of them to the Super Bowl in Miami. However, this win in Phoenix inched them closer to the big game in February.

The 49ers’ defense was nowhere near as strong as they were in previous games, but quarterback Jimmy Garoppolo saved the night, throwing 317 yards and four touchdowns. This is now Garappolo’s highest throwing stat this season, dethroning his 296 yards from Week 2 against the Bengals.

The biggest play for the quarterback last night happened right before the half on a fourth-down. Garoppolo threw a one-yard pass to wide receiver Emmanuel Sanders as the clock was winding down, bringing the score up to two possessions, 21-7.

Garoppolo is happy where he’s at with Sanders.

Cardinals Put Up A Fight

The Arizona Cardinals put up a good fight against San Francisco, scoring on their opening drive and two touchdowns in the second half, but that still wasn’t enough to defeat the 49ers.

There wasn’t a lot of action from the offense, except for Kenyan Drake, who was traded from the Dolphins earlier this week. Drake ran for 110 yards and a touchdown and caught all his four targets for 52 yards.

The costly mistake for Arizona last night was the late timeout from head coach Kliff Kingsbury before the half that set up Garoppolo’s touchdown pass to Sanders.

The Cardinals had an explosive play near the end of the fourth quarter. Quarterback Kyler Murray threw a pass to Andy Isabella and went 88-yards for a touchdown. And after a successful two-point conversion completed by Drake, the score was 28-25.

Time eventually ran out for Arizona when the 49ers kept possession of the ball for the remainder of the game.

The San Francisco 49ers will host the Seattle Seahawks for a Monday Night Football game on Nov. 11.

The Arizona Cardinals will travel to the Tampa Bay Buccaneers on Nov. 10.

I am a fifth-year journalism major, specializing in sports and media. My favorite sport to watch and cover are college and NFL football. When I'm not doing that, I enjoy hanging out with my cat, going to concerts and traveling.
@sportsabrina
Previous Badgers have their hands full on the road against unbeaten Buckeyes
Next Holloway Heading to 2020 Olympics 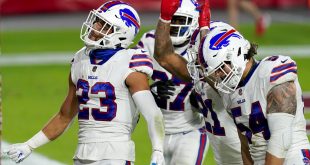