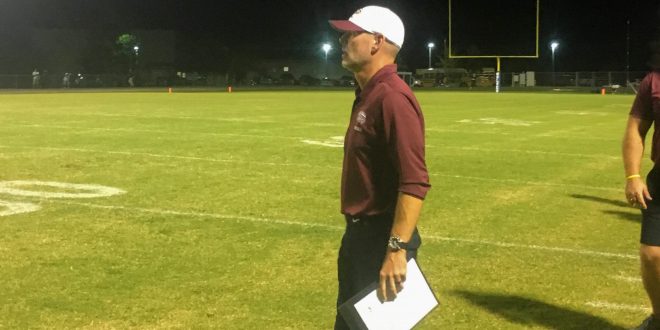 When asked if Friday’s game against Munroe will act as a tune-up for the playoffs, Oak Hall head coach RJ Fuhr made it known that his team was not taking its final regular season game for granted.

Oak Hall travels to Quincy, Florida, on Friday to take on Munroe. Senior running back Anquine Jordan and junior quarterback Xavier Gray are well-protected behind the Bobcats’ big offensive line.

“We have to do some different things on defense because of the size mismatch,” Fuhr said.  On paper, Oak Hall (6-3) appears to be superior to Munroe (1-8). But Fuhr knows that Munroe is a better team than their record shows.

“​I told the team at practice yesterday that we need to go into the playoffs with momentum,” Fuhr said. “We can’t look past this game with Munroe.”

The Eagles blanked Munroe in their last trip to Quincy in 2017, 38-0. A similar win this year would help Oak Hall create some much needed momentum after an excruciating loss to Maclay.

“That game was 14-10 at the half and 21-16 with nine minutes left in the game,” Fuhr said. “Our guys know that they were right there with one of the best 2A teams in Florida.”

“Zhai has been a player that has done everything we have asked of him,” Fuhr said. “He’s played free safety, strong safety, cornerback, slot receiver and has returned kicks and punts.”

Smith is a Swiss Army knife for the Eagles’ defense. Ponton is also an asset to the defense, but does not have the same football experience as Smith.

“I saw him playing for our basketball team last year and he was getting rebounds that he shouldn’t have been getting,” Fuhr said. “The fact that he’s had seven sacks and has never played organized tackle football is a testament to his athleticism, coachability and his work ethic.”

The Florida Athletic Coaches Association (FACA) named Smith, as well as sophomore quarterback Cole Gonzales, to its District 7 All-District Team. ​Smith is a first-team cornerback, and Gonzales is the only underclassman that received this honor in the district. FACA also named Gonzales as 2A Player of the Year.

“I was driving home from practice and I pulled into my driveway and checked my phone,” Gonzales said. “I just sat there in my car thinking about how blessed I was. But right now, I hang it up and look forward to what I have to do to; win this game Friday to give our team momentum going into the playoffs.”

@NevadaCullen
Previous High School Football Game Preview: Buchholz Versus Santa Fe
Next Badgers have their hands full on the road against unbeaten Buckeyes