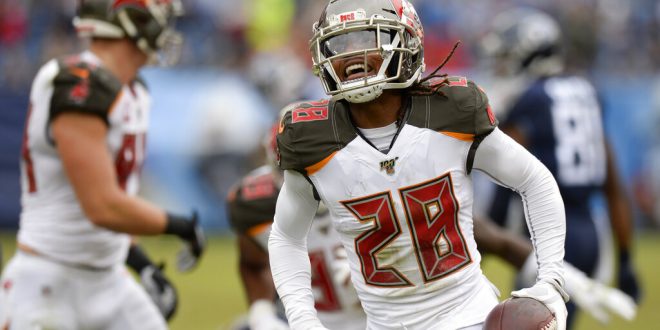 Tampa Bay Buccaneers cornerback Vernon III Hargreaves (28) celebrates after recovering a fumble by the Tennessee Titans in the second half of an NFL football game Sunday, Oct. 27, 2019, in Nashville, Tenn. (AP Photo/Mark Zaleski)

Buccaneers Back in Seattle for First Time Since 2013

The Tampa Buccaneers head into the jungle searching for a path back to success when they face the Seattle Seahawks and the 12th Man on Sunday. At 2-5 and losers of three straight, the Bucs need a win to get out of the weeds.

However, Tampa Bay quarterback Jameis Winston said the team focused on improving communication given the tough road environment. This is the first trip to the Emerald City for Winston and some of his teammates. Now he’ll go in with his team desperate to get back in the win column.

Winston on any added pressure to win:

Buccaneers Head Coach Bruce Arians has plenty of experience facing Pete Carroll and the Seahawks seeing as he only coached against them for five years in Arizona. Coincidentally enough, Arians is 4-1 against Seattle at CenturyLink Field.

“A lot of those games were really close games that we won at the end,” Arians said. “If you can hang in there with the crowd, environment and everything that’s so unique about the place and don’t get overwhelmed, you’ll have a chance to win the game.”

What’ll give Tampa Bay a chance are its big-play wideouts and a recent injury to the Seattle offensive line.

Additionally, a season-ending injury to center Justin Britt could hamper the Seahawks offensive line. Working in a new center could provide an advantage to Tampa Bay’s ferocious defensive front.

BA talks about the instant impact of JPP, our week nine matchup in Seattle and more.

Turnovers are a key for a Tampa Bay team that turned it over 11 times in its last two games alone. Winston himself committed 10 of them. The Bucs will face a defense led by linebacker Bobby Wagner that has 15 takeaways this season.

Furthermore, the Buccaneers have the challenge of defending Russell Wilson. He’s the NFL leader in passing touchdowns (17), boasts a top-10 completion percentage (68.4), top 10 in yards per completion (12.4) and is third in QBR (79.6).

Arians respects Wilson’s ability to make spectacular moments out of broken plays. To him, Wilson’s as good a dual-threat quarterback there is.

“A lot of guys can scramble, a lot of guys can run,” Arians said. “But, not (many) guys can throw the ball downfield, across the field and just know where your guys are once you break the pocket.”

The Seahawks benefited from an arguably easy first half of the season. Five of their six wins came against teams with losing records. But, Wagner isn’t concerned about where his team is.

Wagner on the team’s status: