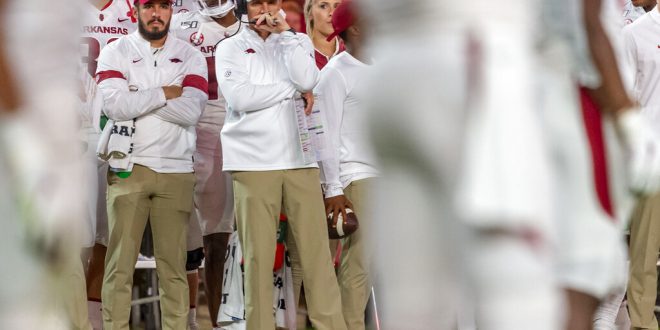 Arkansas looks to halt its six game losing streak to the Western Kentucky Hilltoppers this Saturday.

Both teams are struggling on the season averaging under 23 points a game. Even with the struggles, Coach Morris has pride that his team is still coming out and giving their all in practice. Not keeping their heads down but looking up and working to improve.

ESPN`s Power Index states in favor (62.5%) of the Razorbacks for this game with a spread of +1.5 for the Hilltoppers.

Morris commented on how it will be great to be back in front of their fans for senior day.

Chad Morris – The University of Arkansas head coach who started in the 2018 season. The razorback`s have had five different head coaches in the last ten years showing that they cannot get a solidified program. Morris is 0-14 in the SEC over the last two seasons and as a result, the razorback fans have called for a halt and for their head coach to be fired.

Tyson Helton – The Western Kentucky University head coach, who returned back to the program after a three year hiatus, became the head coach for the 2019 season. His record with the program is 5-4 as he regains control and starts shaping the team to his ideology. His strong suit is a powerful offense which he plans to execute through reps and time.

Kickoff is scheduled for 12 p.m. EST. Coverage is provided by the SEC Network.

Hey! I am a telecommunications major with a specialization in video production. I aspire to film documentaries with extreme athletes traveling around the world.
Previous Nick Foles Returns As Jags QB
Next CFP Poll Makes Florida-Clemson Game a Possibility