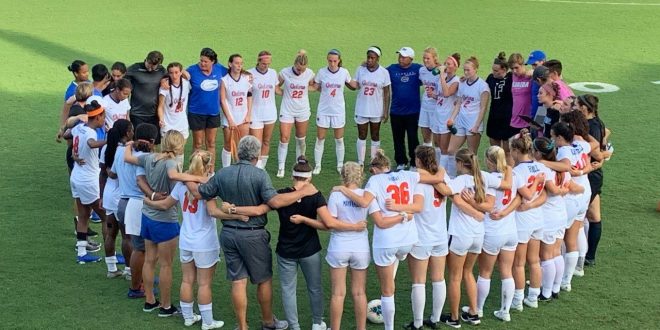 Gators Through to Semis of SEC Tournament

The Florida Gators secured a spot in the semifinals of the SEC Tournament with a 2-1 win over Texas A&M Tuesday evening. The fifth-seed Gators defeated the fourth-seed Aggies with goals from Parker Roberts (41′) and Vanessa Kara (63′).

Ally Watt scored her 15th goal of the season with a beautiful free kick in the 81st minute, but it was too little, too late for the Aggies.

Both starting goalkeepers made some good saves. However, Susi Espinoza and Shantel Hutton may feel that they could’ve done more on the goals they allowed.

Kit Loferski had a one-on-one opportunity against Hutton in the 40th minute, but A&M’s keeper came up with the goods and parried the shot away.

The resulting corner is where the Gators would strike. Sammie Betters swung the ball into Roberts. Tightly marked by her defender, the ball popped straight up into the air. While her defender lost sight of the ball, Roberts was able to volley it with the outside of her right foot. Rather than making what should’ve been a routine save, Hutton allowed the ball to sneak right under her arms.

Roberts’ goal in the 41st minute was the difference-maker heading into the half.

Florida doubled its lead in the 63rd minute through top-goal-scorer Vanessa Kara. She bagged her ninth of the season off of another mistake from Hutton.

Betters played a perfectly weighted through ball to send Kara in on net. The only issue was that Kara had virtually no angle to put a tangible effort on target. That didn’t stop her. She struck the ball directly at Hutton at her near post, yet instead of saving it, Hutton essentially helped it into the net.

Despite the deficit, TAMU continued to fight to get on the score sheet. Watt would finally get a goal back in the 81st minute with a splendid free kick that flew in off the crossbar. While it was well-placed, it went in right over Espinoza’s head in goal. It’s very possible that she could’ve saved it had she been in a better starting position.

Espinoza and Hutton made two saves each.

With the win, the Gators will advance to the semifinals of the SEC Tournament to face No.1-seeded Arkansas. That match will begin at 4:30 p.m. on Thursday.