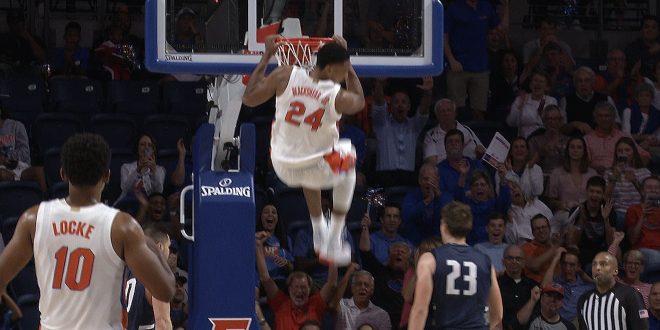 The Florida Gators won their season opener against the North Florida Ospreys on Tuesday, 74-59.

@GatorsMBK takes the court as the @MBKRowdies get LOUD. These #Gators fans are ready to kick off the season. @ESPNGainesville pic.twitter.com/PP4CpHn253

Florida’s Kerry Blackshear Jr. led all scorers with 20 points. He added 10 rebounds in a double-double effort to lead the Gators to the first win of their season.

“It’s amazing to have somebody like that on your own team, somebody who can play like that. You come off the screen and he pops … I don’t think anyone can guard him.” -Tre Mann on Kerry Blackshear Jr.

Other key contributors for the Gators include sophomore Noah Locke, who had 14 points, and freshman Tre Mann, who had 11 points. Mann played a complete game, distributing the ball and taking good shots en route to the team’s win over UNF.

The Gators held the Osprey’s best scorer Garrett Sams to 14 points. Nine of Sams’ points came in the second half against Florida’s bench. Sams averaged 12.5 points per game last season for North Florida

Early in the game, the Gators did not shoot the ball well.

In the first half, the Gators shot 37 percent, but the second half was a different story. Florida improved and came out making five of their first six en route to a 47 percent field goal percentage in the second half.

Florida moved the ball well throughout the game. Consistently, players such as Blackshear Jr. would pass out of the post to an open shooter on the perimeter. The Gators totaled 15 assists, which means that 51 percent of their field goals were assisted.

#Gators HC @MikeWhiteUF says that he likes his team's selflessness with the ball. Says he hopes he can say the same thing later in the season.

Speaking of Blackshear Jr, his double-double marks the 14th time in his career that he accomplished this feat. North Florida head coach Matthew Driscoll spoke very highly of Blackshear Jr. in his post-game comments to the media.

Players such as Tre Mann said that Blackshear Jr. has played a huge leadership role for the team this season.

The Gators also showed growth in team chemistry. Players looked more comfortable on defense and the team often switched to zones, which require more trust that teammates will rotate and be in the right place to make plays.

According to freshman guard Tre Mann, the team is growing closer every day.

It’s hard to complain about a win.

Some things do need to be addressed. The Gators, for the second game in a row, were outscored in the second half 37-35.

Perimeter defense continues to be a struggle for Mike White’s team. The Gators allowed the Ospreys to shoot 47 percent from three-point range and slacked defending the paint in the second half.

According to White, the team lost it’s intensity four minutes into the second half and never got it back.

Even still, players continue to make some strides defensively. White had high praise for Tre Mann and his growth defensively.

The Gators take on Florida State on Sunday, Nov. 10. at 1 p.m. in the Stephen C. O’Connell Center.

Steven Walker is a beat writer for ESPN Gainesville and is currently studying Journalism & Sports Media at the University of Florida.
@swalker_7
Previous Former Met Carlos Beltran Takes Over as Manager
Next Gators Through to Semis of SEC Tournament