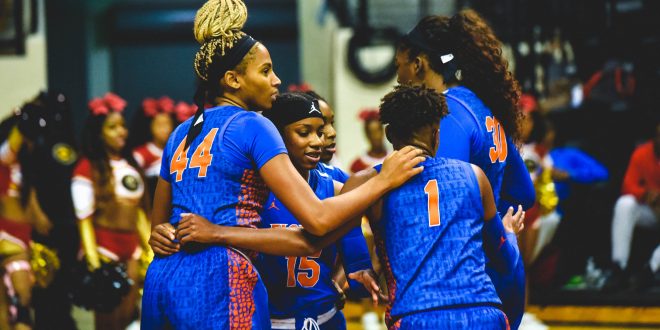 In  a contest that saw 18 lead changes and six ties, it was the Florida Gators who came out on top over the Grambling State Tigers.

Trailing 52-51 heading into the final quarter, the visiting Gators were able to construct a fourth quarter rally to bring a 72-65 victory back to Gainesville.

Basketball is no different than football in the sense that turnovers equal touchdowns.

During Tuesday night’s game, the Gators forced 21 Grambling State turnovers while committing only 11 of their own. However, the big turnover-related stat came from the 24 points that the Gators scored off of the forced turnovers.

Competing in the paint

In addition to taking the turnover battle, the Gators also found success down low.

Through four quarters, the Gators outscored the Tigers in the box 36-20. Leading the way in the paint for the Gators, redshirt senior Zada Williams led the stat sheet offensively with 16 points.

Freshman, Nina Rickards, also contributed from the inside with 50% field goal percentage and two free throws that tallied 10 points.

After years of struggles, the Florida women’s basketball program seems to be in good hands with Cameron Newbauer at the helm. But even more so, the Gators have no shortage of rising talent.

In the Gators’ opening road win of the season, two other Gator rookies, in addition to Rickards, earned themselves a line on the stat sheet.

“To fight, come out on top and have young kids contribute and make some big plays late was tremendous.” — Cameron Newbauer

Freshman guard, Lavender Briggs earned her way into the starting lineup ahead of Tuesday night’s contest. And during the game, her performance validated Newbauer’s trust in the young ball-handler. Through the course of four quarters, Briggs distributed the ball well — nabbing a game-high eight assists while also contributing six points.

Meanwhile, freshman sharpshooter, Brylee Bartram netted three goals from beyond the net — good for nine points. One of Bartram’s scores from downtown helped the Gators to a 10-point lead in the fourth quarter — the quarter that ultimately won the Florida the game.

Ainslie is a journalism major at the University of Florida where she specializes in Sports Media. Her main passion is college football as it was a huge part of her childhood. Ainslie serves as a current correspondent for the Ocala Star-Banner, a newspaper for the Ocala, Florida area. She currently covers Marion County high school sports.
Previous Gators Through to Semis of SEC Tournament
Next Ohio State Tops CF Playoff Poll