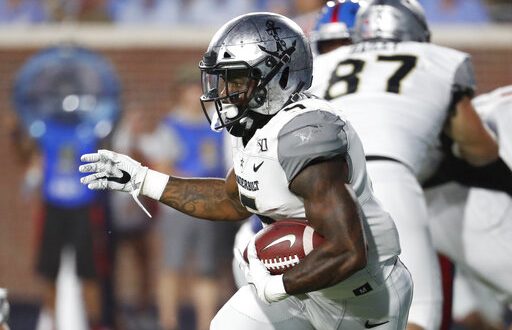 Vanderbilt running back Ke'Shawn Vaughn (5) runs upfield for a first down against Mississippi during the first half of their NCAA college football game in Oxford, Miss., Saturday, Oct. 5, 2019. (AP Photo/Rogelio V. Solis) 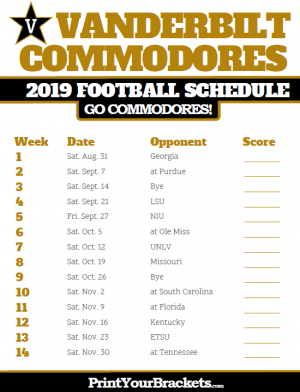 Already having played then-No. 3 Georgia, No. 2 LSU and then-No. 22 Missouri, the Commodores rank as high as the third hardest schedule in the country, according to teamrankings.com. This has led to a rocky start, claiming only two wins in its first eight matches. Now, it’s schedule doesn’t get any easier, having to enter a hostile Ben Hill Griffin Stadium to face No. 10 Florida at noon.

Vanderbilt is coming off a loss to South Carolina last week. Before that, the Commodores had their best performance of the season, shutting down the Missouri Tigers in a 21-14 win. In the loss to South Carolina, Vanderbilt did a good job of protecting its quarterbacks Mo Hasan and Riley Neal. They didn’t allow a sack all game long. Vanderbilt sideline reporter Mitch Light knows just how important the line of scrimmage will be in this week’s bout against the Gators.

The Commodores offensive line will have a tough task ahead, trying to slow down Jonathan Greenard and company on Florida’s defensive line. The Gators sit at 16th in the nation with 29 sacks on the year. Both Greenard and Jabari Zuniga, who dealt with injury issues entering last week’s Georgia game where the Gators fell 24-17, are expected to be fully healthy against the Commodores. Vanderbilt’s allowed 17 sacks this season, ranking 76th in the NCAA in team sacks allowed.

Who Will Get the Start?

Vanderbilt’s QB room can be described as only one thing at the moment: a mess.

The injury bug has plagued the position under center for the Commodores as of late. Mason has seen two of his signal-callers go down and leave the game with concussions in its past two games. Hasan, who led the team to its first SEC victory of the season over Missouri three weeks ago, had gotten the nod to play but only threw 11 passes before being knocked out of the game. Neal, whose thrown six touchdowns and four interceptions this season, reentered the game for Vanderbilt. It wasn’t too long before he was also injured, leaving Vanderbilt with just two remaining healthy quarterbacks on its roster. Vanderbilt beat reporter for the Tennessean Adam Sparks highlights the difficult and messy situation surrounding the quarterback room in Nashville, Tennessee.

Deuce Wallace will most likely get the nod to start in the Swamp, leaving Vanderbilt to start its third-string quarterback on the road. It’s not an ideal situation for Mason, obviously, but the numbers only hinder the Commodores hope even more. Wallace has thrown for just 217 yards on 76 passing attempts and has yet to throw a touchdown in contrast to his three interceptions. Vanderbilt’s passing game as a whole has been very lackluster this season, with running back Ke’Shawn Vaughn notching the same amount of rushing touchdowns as his entire team has receiving touchdowns with six.

Previous Jags at the Bye Week: Time to Reset
Next Oak Hall Routs Saint Francis in the First Round of the Class 2A Playoffs, 47-0