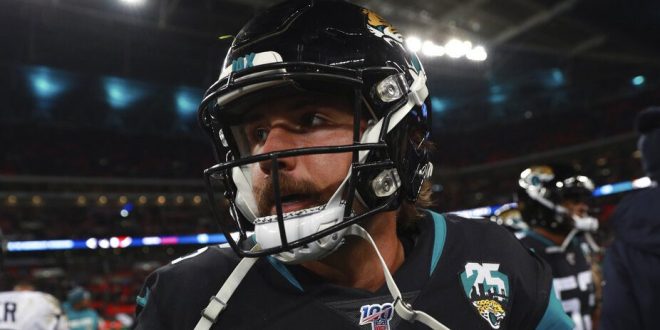 Jags at the Bye Week: Time to Reset

Doug Marrone and Co. have finally made it to the bye week. The Jags made it to the break in a competitive position and opportunity to reset before trying to make a playoff push in the season’s last eight weeks.

Our top 10 plays through the first half of the season ⤵ pic.twitter.com/1uU4uR8sIr

“I’m disappointed in myself that I haven’t been able to do a better job for the fans and this team,” Marrone said. “And having more wins because that’s what our job is.”

Foles Returns to His Role

Exit Gardner Minshew, enter Nick Foles. What better way to reset than with going back to the guy who was supposed to start from the jump?

The Jaguars named Foles the starting quarterback after Minshew handled the responsibilities since Foles went down with a broken left clavicle in Week 1.

Marrone on his QB situation:

Minshew’s 2,285 yards are the third-most by a Jags rookie and has the second-most touchdown passes with 13. If he plays any more extended time this season, he could break both of those records.

"We're excited for the opportunity of him being back."

But now Jacksonville has the veteran presence it wanted at quarterback. Marrone said they worked to slowly but surely to bring him back up to speed. They did things like bringing close-quarter pressure and blitzing him to do the best job possible to get him ready.

Where Do They Rank?

With their mustachioed boy wonder at the helm, the Jaguars offense was — on the field? It wasn’t world-beating but it definitely wasn’t awful.

The Jags rank 11th in the NFL with over 330 yards per game and average almost six yards per play. But, their 19.6 points per game are tied for 23. Sounds pretty middle-of-the-pack.

Also, over 70 percent of Jacksonville’s rushing yards this season are from Leonard Fournette. His 831 yards are third in the league but he’s found paydirt only once this year.

With 536 total yards through 4 games, @_Fournette is our @FedEx #AirAndGround Player of the Month for October. pic.twitter.com/JSUXaeYnel

The Jags are right in the middle of the NFL standings with 350 yards per game allowed (16th best). But Sacksonville is alive and well as Marrone’s squad is third with 30 sacks.

Some Jacksonville players with multiple sacks:

The back half of Jacksonville’s schedule is loaded with road tests and multiple divisional showdowns including two against Indianapolis and a road game against the Raiders. Let’s see what the bye week does for them.