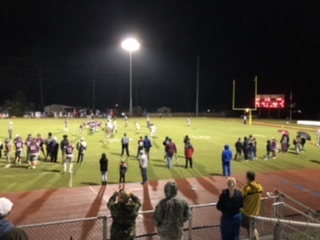 Oak Hall Routs Saint Francis in the First Round of the Class 2A Playoffs, 47-0

In a rainy first-round playoff matchup, the Oak Hall Eagles (7-3) defeated the Saint Francis Catholic Wolves (3-7) by a score of 47-0.

Oak Hall hopped out to an early 7-0 lead thanks to a 27 yard back shoulder pass from Cole Gonzales to Andrew Pickens, followed by a Carter Coleman touchdown run on first and goal. On their next drive, the Wolves failed to answer after failing to convert on fourth down. With generous field position, Oak Hall drove down inside the Saint Francis 10 yard line. After failing to score on three consecutive plays, the Eagles converted on fourth and goal. Sophomore quarterback, Cole Gonzales, ran it in for a touchdown to increase Oak Hall’s lead to 14. As the first quarter concluded, Oak Hall forced yet another Saint Francis three and out.

After a nice stop by the Saint Francis defense to begin the quarter, Oak Hall’s weak punt set up generous field position for the Wolves. In spite of this, Saint Francis quarterback, Tyler Stone, threw an interception just two plays later to Zhai Smith. Oak Hall wasted no time capitalizing on the Saint Francis turnover. The Eagles led a 9 play, 52-yard drive highlighted by a 14-yard touchdown run by Gonzales on a read-option.

Down 21 points, the Saint Francis offense looked to answer before halftime. However, they failed in doing so and were forced to punt after quickly going three and out once again. This gave Oak Hall one last chance before the end of the half to increase their lead. On fourth down and three, the Eagles converted on yet another Gonzales quarterback sneak. A pass interference penalty against Saint Francis would then set up first and goal for Oak Hall. On the next play, Gonzales threw a nine-yard touchdown pass to sophomore wideout, Kyle Pollock, in the back corner of the end zone. The Eagles entered halftime with a commanding 28 point lead.

After a few defensive stops, Oak Hall found the end zone again via a Walker Smith touchdown reception on fourth and goal. The missed PAT kept the score at 34-0. Another stagnant Saint Francis drive followed as they failed to convert on fourth down inside their own territory. This set up a short field for Oak Hall’s offense, who once again capitalized. An impressive diving catch by Zhai Smith on third and long kept the drive alive. This was followed by Andrew Pickens’ second touchdown reception of the night, which expanded the Eagles lead to 41.

With a running clock, the fourth quarter consisted of only one drive for each team. Oak Hall played many of their backups on the last drive, featuring freshman running back, James Parker. With under a minute remaining in the game, Parker capped off Oak Hall’s victory with a 4-yard touchdown run.

No extra point was attempted, and the final score was 47-0, Eagles.

Although Saint Francis’ 2019 season is now officially over, their young talent should propel the team further in the playoffs in the near future. Meanwhile, Oak Hall advances to the next round of the playoffs to face Foundation Academy (8-2).

Hello, I am currently a junior at UF studying sports media journalism with a concentration in Political Science. I contribute web and radio content weekly for WRUF ESPN Gainesville. Be sure to check out some of my recent articles!
Previous Short-Handed Vanderbilt Prepares to Play Florida
Next Defense carries Columbia Football to first round victory over Ponte Vedra