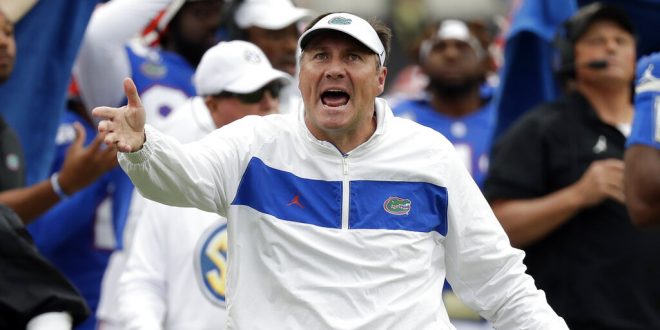 Florida head coach Dan Mullen disputes a call by officials during the first half of an NCAA college football game against Georgia, Saturday, Nov. 2, 2019, in Jacksonville, Fla. (AP Photo/John Raoux)

Mullen, Gators Look Ahead to Next Week

After handling the Vanderbilt Commodores 56-0 at home this weekend, the Gators head to Columbia for an SEC showdown against the Missouri Tigers.

The Gators dominated Vanderbilt in all facets of the game this past weekend, just look at the score sheet. Even so, it wasn’t pretty at the beginning.

In the first drive of the game, Florida would go for it on a fourth-down only to fail the conversion. Missed field goals and red zone turnovers plagued the Gators as they would take just a 14-0 lead into halftime.

In the third quarter, the Gators turned it up. In this quarter alone, Kyle Trask went 7/7 for 188 while Emory Jones had two rushing plays for 28 yards. Each of these plays either went for a first down or touchdown. Here’s what Mullen had to say about his offense in the second half.

Looking Ahead to Missouri

Florida will look to finish the season strong in its final SEC game of the season. The Gators will be tasked with yet another noon kickoff but the catch, they’ll be playing at 11 a.m. local time. Mullen understands the Gators have had several of these games already this year but knows his guys are up for it.

Defensive end Jabari Zuniga was held out this weekend with yet another injury. Stepping up in his absence was freshman Mohamoud Diabate, who finished the day with three sacks and earned SEC Freshman of the Week honors.

Last time these two teams met a year ago, Missouri handled the Florida Gators in the Swamp winning 38-17. Kyle Trask replaced Felipe Franks in that games only for Trask to get injured. He’ll get another shot against the Tigers this weekend. Mullen goes into the challenges of facing this team on the road.

With just two games remaining in the regular season, the Gators will attempt to improve their ranking and get into a New Year’s Six Bowl. The main way to help their case is to win out. Florida will kick off against Missouri this Saturday at noon ET.