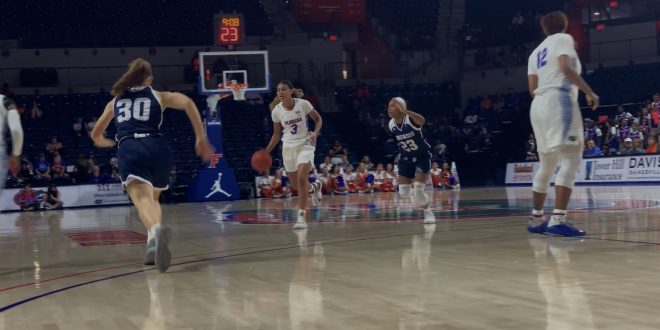 The Florida Gator women’s basketball team earned a 71-54 win against the Longwood Lancers in their home opener. They now advance to a 2-0 record for the first time since their 2016-2017 season. This also marks the Gators’ second win against the Lancers, making their record 2-0.

Similar to previous games, the Gators had a slow start in the first quarter. This quarter had three lead changes until Longwood eventually extended their lead to 11.

But it did not take the Gators long to catch up to the Lancers.

Freshman guard Brylee Bartram ended the first quarter with a three-pointer which she would later compliment with two more along with two free throws that would help the Gators take the lead in the second quarter. She ended the game with a total of 11 points.

Another freshman who left her mark on the court was guard Lavender Briggs. She ended the game with her first career double-double with 16 points and 11 rebounds.

The freshman class was certainly shining during this game. Freshman guard Nina Rickards finished the game with nine points and 11 rebounds; one point away from joining Briggs in the double-double club.

Bartram, Briggs and Rickards totaled 36 points and 23 rebounds in their first game at the Exactech Arena.

But every new player needs fearless leaders to show them the way. This is exactly what both veterans Kiki Smith and Zada Williams did in this game.

Redshirt senior forward Williams ended the game with 13 points and seven rebounds. On the other hand, Smith was also shy of scoring a double-double as she recorded nine points with nine rebounds and five assists.

Both players have shown the kind of experience they have on the court this season. Smith reached double digits in the first game of the season and was just one point shy from doing it again. Williams on the other hand reached those double figures in both games and is not showing any signs of stopping any time soon.

This win was not only special for the players, but also for head coach Cam Newbauer as he reached his 100th collegiate win. Before coming to Florida, Newbauer had recorded 79 wins back in Belmont and now his 21st victory with the Gators is worth celebrating.

Next up for the Gators is another home matchup when they host the Samford Bulldogs on Nov. 16. Tip-off for this match is set for 2 p.m.

Camila is a senior at the University of Florida studying Telecommunications with a specialization in production and a minor in Innovation. She is also seeking a Sports Management certificate. Camila is also WUFT's news director as well as a sports reporter/anchor.
@CamilaMaffuz
Previous FSU Upsets No. 6 Gators 63-51
Next Mullen, Gators Look Ahead to Next Week