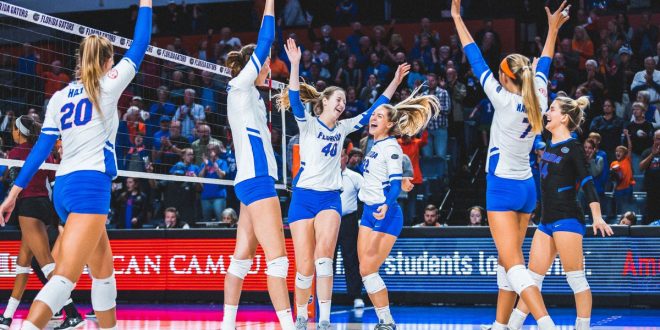 In their second meeting of the season, the No. 11 Florida Gators volleyball team hosts the LSU Tigers to in Exactech Arena for a Friday night match-up.

The last time the two teams met in Baton Rouge, the Gators completed the three-set sweep over the Tigers.

Florida volleyball (20-3, 11-1 SEC), continues to be a powerful force within the conference both offensively and defensively.

With the Gators coming off of a sweep on the road over Mississippi State they look to keep up the momentum.

Florida gets the sweep on the road to move to 11-1 in the SEC! #GoGators pic.twitter.com/32JjSmoQqt

The Gators currently lead the SEC in blocks, averaging 2.6 per set. Middle blockers Lauren Dooley and Rachel Kramer have led to the defense.

Dooley leads the Gators with 83 blocks on the season.

Outside hitter Thayer Hall and Holly Carlton have been a notable offensive presence for Florida.

Kramer ranks tenth in the SEC in hitting percentage, .330.

In addition to ranking sixth in the SEC for kills, Hall leads the Gators with 325 kills on the season.

A Look at the Tigers

The LSU Tigers (13-10, 7-6 SEC) are coming off of their first win over a ranked opponent this season.

On Sunday, the Tigers hosted No. 25 Texas A&M where they beat the Aggies in four sets.

The Tigers rank fifth in the SEC in opponent hitting percentage, .197.

LSU has a strong defensive back court led by defensive specialist Raigen Cianciulli. The junior ranks third in the SEC for digs with an average of 4.33 per set.

Offensively the Tigers are led by right side hitter Taylor Bannister. Bannister ranks fifth in the SEC for kills, averaging 4.03 per set.

In addition, Bannister also leads the Tigers in kills and service aces.