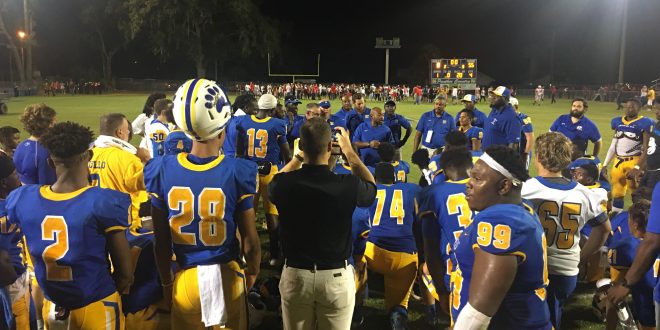 Newberry Head Coach Edward Johnson addresses his team after a 55-8 win over Williston.

The Newberry Panthers and Chiefland Indians are gearing up for a post season match up. These two teams will face off tonight in the region four regional semifinals. The winner of this game will move onto the region finals and face the winner of Hawthorne and Pahokee.

The Panthers received a bye week for being ranked first in region four while the No. 4 Indians defeated the No. 5 Trenton Tigers 21-13.

The Panthers Road to the Playoffs 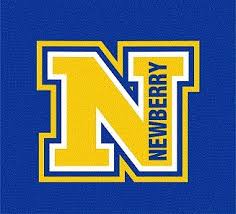 After last years performance, going 1-9, nobody was sure what to expect from the Panthers. And after a bumpy start to the season with a loss to Santa Fe, fans were wondering if history would repeat itself.

Anything but that seemed to happen. The Panthers completely flipped their record from the 2018 to 2019 season going 9-1 this regular season.

A change in coaching staff seemed to be just what this team needed, but head coach Edward Johnson says he knew what his team had all along.

The Panthers average 59.3 tackles per game along with almost four sacks a game. Coach Johnson knows that his teams’ defense stands out and will help them bring down the Indians tonight.

The Indians Road to the Playoffs

The Indians did not receive the bye week that the Panthers did, but they will be coming into tonight with the momentum of bringing down Trenton for the second time this season. Chiefland did not have quite the season they did a year ago when they went 10-2. However, they still pulled out a respectable 7-4 for the 2019 season.

The Indians seemed to have problems pulling out wins at home this season as they only came out of the regular season with two home wins. However, they thrived on the road with just one road loss.

With tackles per game, the two teams are pretty even with Chiefland averaging just .1 more per game than Newberry. The Panthers do have the lead on sacks per game however, more than doubling Chiefland’s 1.5 sacks per game.