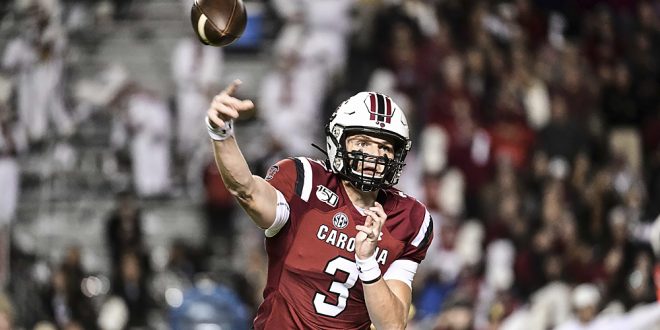 Last week, South Carolina suffered a disappointing loss against Appalachian State, 20-15. In order to stay in the running for their bowl game, they have to win the last two games. However, that’s going to prove difficult against Texas A&M and No. 3 Clemson.

True freshman quarterback Ryan Hilinski has done well this season throwing 2,077 yards, 11 touchdowns, and only four interceptions. Last weekend against Appalachian State he threw for 325 yards, his highest since Alabama at the beginning of the season. Despite the losses this season, Hilinski has proven that he can be a real asset to the Gamecocks in the years to come.

On a personal note, Texas A&M fans will be planning a tribute to Hilinski’s late older brother, Tyler, who took his own life in January 2018, to bring awareness to mental health.

3 is more than a number for South Carolina QB Ryan Hilinski. It symbolizes a brother’s eternal bond and hope for healing. pic.twitter.com/4Jeh2lKD6a

On the other side, their defense is also very strong. South Carolina has only given up 24.50 points and 365.2 yards of total offense per game. The Aggies would need to keep their offense healthy if they have any chance against this Gamecock defense.

A bye week last weekend allowed the Aggies to rest. This rest was well-needed after three straight wins against Ole Miss, Mississippi State, and UTSA.

Against UTSA, the Aggies excelled. Quarterback Kellen Mond completed 16 passes of 21 for 211 yards and one touchdown. Running back Isaiah Spiller had a day with 20 carries for 217 yards and three touchdowns. When all was said and done, the Aggies dominated UTSA, 45-14.

In addition to a great Aggies team, the Gamecocks are also dealing with injuries. Head coach Will Muschamp announced on Thursday that three of his players will not play on Saturday.

The team’s top rusher Tavien Feaster has been dealing with a groin injury sustained last week, OrTre Smith is recovering from knee surgery and A.J. Turner has been slowed down due to a hamstring issue. However, there is good news for the game against Clemson.

Will Muschamp believes RB Tavien Feaster (groin), WR OrTre Smith (knee) and RB/DB A.J. Turner (hamstring) will be back for Clemson game. All three are out for Texas A&M game.

To see if the Gamecocks keep the dream alive, tune in on Saturday at 7:30 p.m. ET on the SEC Network.

I am a fifth-year journalism major, specializing in sports and media. My favorite sport to watch and cover are college and NFL football. When I'm not doing that, I enjoy hanging out with my cat, going to concerts and traveling.
@sportsabrina
Previous Florida volleyball hosts LSU Tigers in SEC match-up
Next No room for error for Georgia against Auburn