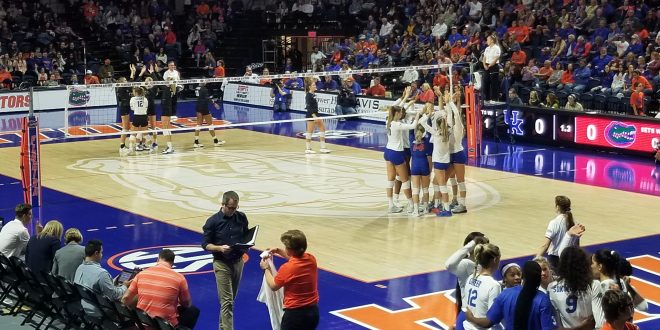 Florida lost twice on Sunday to a team that it just can’t get past this season.

The number 11 ranked Florida volleyball team saw its 10-match winning streak snapped by the 17th-ranked Kentucky Wildcats Sunday in five sets. Not only did Florida lose the match, but also first place in the conference standings.

It might’ve been the best match of the year in terms of quality of play. Florida coach Mary Wise said it was just as advertised and her team still has a conference title in front of it.

Kentucky and Florida battled all throughout the match but the Gators found themselves with a chance to send themselves home a winner up 24-23 in Set 4.  Then came a kill by Kendyl Paris to tie it. One by Alli Stumler gave UK the lead. And another by Stumler gave them the set.  Three straight kills kept the Wildcats alive and killed Florida’s momentum. Kentucky started the final frame 5-0 and never looked back to earn the win.

Florida sophomore outside hitter Thayer Hall was visibly frustrated after the match. She said it was repeat of Florida’s loss in Lexington in October.

“When we went up there, they pushed and we didn’t push back and the same thing happened today,” she said. “We did not push like we know we can.”

For Florida, losing that fourth set was deflating.  Senior middle blocker Rachael Kramer said being so close to victory and not finishing took a lot of energy out of the team. But that’s no excuse for her.

“A mature team needs to know that it can’t go into the fifth set,” she said. “You have to roll that over after the fourth and continue on.”

Kramer said it was a great learning point about having a short memory for the team’s sophomores. If they can take what happened Sunday and prevent it from happening next season or later this season then it’s all worth it in Kramer’s eyes.

Result aside, there was some serious talent on the court Sunday afternoon producing some eye-popping stat lines.

Edmond tied former teammate Anni Thomasson for the most kills in a match. They are the only two players in Kentucky history to record 30+ kills in a match in the rally scoring era.

Stumler joined Edmond as one of five players in school history to post 25+ kills in a match. The duo accounted for 73 percent of Kentucky’s kills. Meanwhile, Lilley had her fourth career match with more than 60 assists.

Wise talks about Edmond and Stumler.

Florida has a quick turnaround as they face the bottom-feeding Auburn Tigers on the Plains Wednesday night.

“Let’s see how we respond to the pressure because we’re going to share an SEC championship or we’re not,” Hall said.