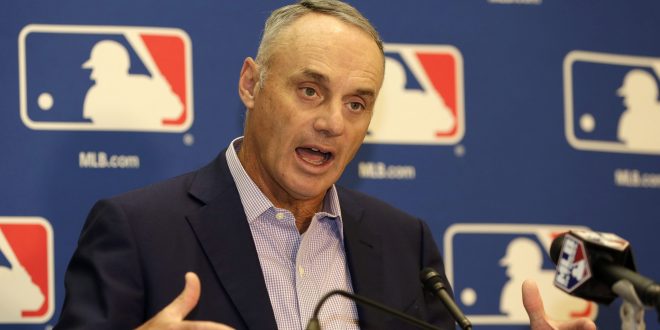 Rob Manfred, Major League Baseball’s commissioner, had no issues announcing an ongoing investigation that was launched after a bombshell report from The Athletic.

“One thing in specific we are looking for is picking up signs coming out of the dugout,” the 2017 email-sender wrote. “What we are looking for is how much we can see, how we would log things, if we need cameras/binoculars, etc. So go to a game, see what you can (or can’t) do and report back your findings.”

However, leaking the email came with just one condition — omitting the sender and receiver’s names.

According to The Athletic’s article, scouts weren’t shy when discussing the ploy outside of the email. In such discussions, multiple Astros scouts expressed their hesitance to participate in the scheme.

For example, Mike Fiers, a pitcher for the Astros in 2017, had no issues snitching on his former club.

That’s not playing the game the right way,” Fiers said. “They were advanced and willing to go above and beyond to win.”

The group of former Astros were able to disclose exactly how the sign-stealing happened.

Allegedly, a camera in centerfield had its sights set on the catcher. While the opposing catcher signed for a pitch, footage was transmitted to a screen in the dugout. According to reports, if the upcoming pitch was an off-speed pitch, the dugout would make loud banging noises. On the other hand, if the pitch was a fastball, the Astros would remain quiet.

Bregman down 0-2. gets two offspeed pitches that come with the bang. spits on the first. homers on the second. pic.twitter.com/pM6i0UKgGH

According to many, sign-stealing isn’t a single team issue. In fact, the Astros won’t be the first team to be investigated for such.

The Boston Red Sox dealt with their own accusations in a game against the Yankees in 2017. In a story published by the New York Times, reports said that a member of the Red Sox training staff was receiving signals to his smart watch. Once the trained received the sign, he told players in the dugout and players would relay the sign to the batter.

However, after the Red Sox episode, Rob Manfred warned all other clubs that any future sign-stealing violations would come with harsher punishments.

Yet, despite past incidents, Manfred isn’t speculating beyond the Astros’ organization at this time:

Manfred and other MLB officials are continuing to look into the allegations against the Houston Astros.

However, Manfred isn’t sure of any timetable as to when the investigation will be concluded:

Ainslie is a journalism major at the University of Florida where she specializes in Sports Media. Her main passion is college football as it was a huge part of her childhood. Ainslie serves as a current correspondent for the Ocala Star-Banner, a newspaper for the Ocala, Florida area. She currently covers Marion County high school sports.
Previous CFB Playoff Rankings: Week 3
Next Carmelo Anthony Debuts for the Trail Blazers

As of Wednesday at midnight, there will be no more baseball activities for the foreseeable …