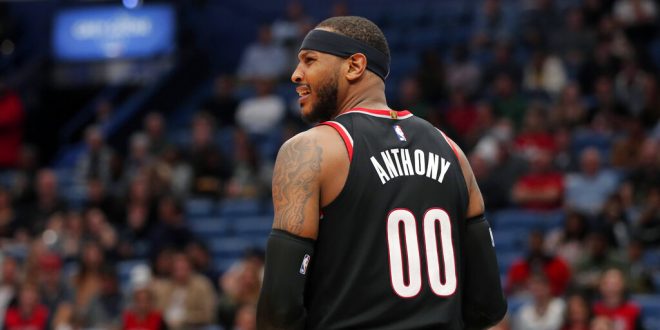 Portland Trail Blazers forward Carmelo Anthony (00) looks to a few for a foul after driving to the basket in the second half of an NBA basketball game against the New Orleans Pelicans in New Orleans, Tuesday, Nov. 19, 2019. The Pelicans won 115-104. (AP Photo/Gerald Herbert)

For the first time in 376 days, small forward Carmelo Anthony scored his first points in NBA action after being signed by the Portland Trail Blazers on Thursday. Albeit in a 115-104 loss to the New Orleans Pelicans, the veteran’s return was a long time coming.

Anthony was last signed by the Houston Rockets before being traded in January to the Chicago Bulls where he was eventually waived in February. The Bulls did this to alleviate luxury-tax penalties.

This is not how the 10-time all-star envisioned his career ending. Nevertheless, Anthony was given a chance to play for a struggling Trail Blazers (5-10) squad. Anthony put up 10 points 0n 4-14 shooting. He also recorded five fouls and five turnovers, but some rust is to be expected from the 35-year-old.

What This Means for Anthony and Portland

Anthony has been removed from the pros for some time. He says that he missed the camaraderie that comes with being on an NBA team more than anything else.

In addition, this slow start to the season comes after Portland made an appearance in the western conference finals just last season. Despite all-star point guard Damian Lillard averaging 28.6 points a game to go along with CJ McCollum‘s 21.3 points per game, the Trail Blazers have struggled to add to the win column.

Anthony started Tuesday in his first game with Portland and head coach Terry Stotts mentioned that is was very possible for Anthony to stay in the starting rotation. However, a 35-year-old veteran won’t be the answer to this team’s problem as of late. The Trail Blazers will travel to Milwaukee to face the Bucks (10-3) Friday at 8 p.m.