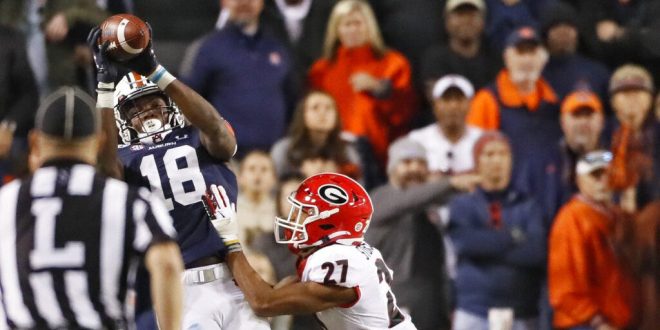 Auburn can take a Week 13 breather in the form of the Samford Bulldogs — or so they should.

But can its offense shape up this late in the season? Or will their defense continue to carry the weight?

Can Auburn Regroup Before the Iron Bowl?

Stepping out of the SEC for a moment might be what Auburn needs.

The No. 16 Tigers haven’t had the best ride in the SEC, with near-wins squandered by a lack of a productive offense. It struggles to put points up on the board, averaging 21 points per game against teams with winning records. And even with Auburn’s running game at a low point, Bo Nix hasn’t quite stepped up to the plate. The Tigers’ QB1 ranks 82nd in passing efficiency in the entire FBS. If that evidence isn’t enough, in his past three outings, Nix’s three rushing touchdowns exceed his two passing, and only once did he get the job done: the win at Ole Miss.

His fellow rushers haven’t put together much towards the ground game, hurting the offense as a whole. In the 14-21 Georgia loss, Nix’s 245 passing yards only amounted to a single passing touchdown, while six rushers combined for a total of 84 yards — 42 by Nix.

Fortunately for Auburn’s offense, the Tigers are a 48.5 point favorite against the Bulldogs, who rank 105th in the FCS in total defense, allowing 448 yards per game.

Auburn’s losses to LSU and Georgia were both particularly tight, but those efforts were anchored by the Auburn defense, led by defensive tackle Derrick Brown. The senior has accumulated 43 total tackles and four sacks on his season. The defense as a whole has been a pivotal part of holding top-ranked FBS offenses to less than 30 points, and all opponents to an average of 17.8 points.

Auburn’s defense will be a key in closing out the rest of its season, but adjustments on offense are of utmost importance for the future of the program and Gus Malzahn.

Auburn will host Samford on Saturday, Nov. 23 at noon, airing on the SEC Network.

The last time Mike Leach and Gus Malzahn squared off, Malzahn had just earned the …