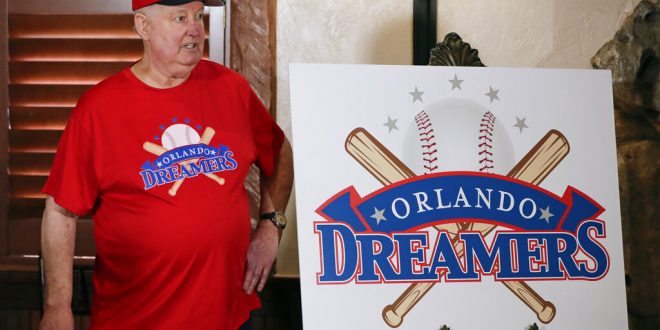 Pat Williams, co-founder of the NBA Orlando Magic basketball team, wears a T-shirt and hat with the logo 'Orlando Dreamers' while speaking at a news conference to announce a campaign to bring a Major League Baseball team to Orlando, Wednesday, Nov. 20, 2019 in Orlando, Fla.. (AP Photo/John Raoux)

The City Beautiful may soon be looking to add its name to the other 27 cities in the United States that have a Major League Baseball franchise. The team would be called the Orlando Dreamers.

The Man Behind the Dream

Pat Williams, one of the crucial figures who helped in the creation of the NBA’s Orlando Magic, announced on Wednesday that he would be pushing the effort to get a franchise in Orlando.

The team’s name is as an homage to the several “Dreamers” who made the area such a national destination.

William’s described the name as a “nod to Walt Disney and Arnold Palmer and the many other visionaries who helped develop this area into the special place it has become.”

He also went on to use one of the city’s other newer sports franchises, Orlando City Soccer Club, as a basis for explaining the great backing that the city has shown to it’s sports franchises.

Williams spent over 30 years with the Orlando Magic in a managerial position. He just recently retired from the NBA at the end of last season.

Many viewed the announcement of this franchise as (pardon the baseball pun but) kind of out of left-field.

The announcement came with little else than an average logo. One that wouldn’t impress a pee wee all-star team let alone inspire Central Florida.

Also, The MLB is still working on the potential relocation of two franchises: The Oakland A’s and even more locally, their neighbors down Interstate 4, the Tampa Bay Rays.

Then there is the issue of baseball in the state itself.

Florida has not treated its MLB franchises with much attention.

Florida already boasts the two lowest attended clubs in the league for 2019.

Nevertheless, The Rays, who are looking for a new potential city to call home, are excited to see the support for baseball in Orlando.

Statement from the Tampa Bay Rays regarding today’s news in Orlando. pic.twitter.com/JkkxgPTATV

Previous Garrett incident still on the minds of the Steelers and Browns
Next Gator Women’s Basketball Look to Continue Strong Start Against No.18 Indiana