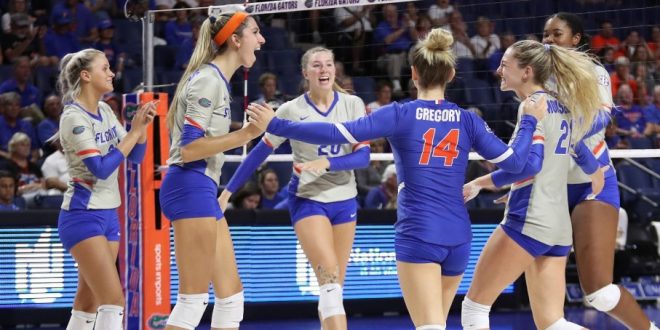 The road trip comes to an end in Athens, Georgia on Sunday for Florida.

After a road sweep of the Auburn Tigers Wednesday night, Florida Gators volleyball is back in action Sunday against the Georgia Bulldogs in Athens. This is Florida’s second out of its last three matches against a team near the top of the SEC and their last road match of the year.

Georgia last beat the Gators in Athens in 2008, it’s been a decade since the Bulldogs earned a win at any site.

Before Tom Black’s team plays host to Florida, they take on the South Carolina Gamecocks Friday night. They enter that match hitting .234 as a team. That’s seventh in the league. Georgia is worse at defending the attack allowing the league’s 11th-worst number at .225.

Freshman outside hitter Kacie Evans is Georgia’s main attacker. She leads the team with 323 kills and is ninth in the SEC with 3.47 kills per set and 3.97 points per set.

Florida Head Coach Mary Wise said she would be surprised if Black doesn’t win SEC Coach of the Year because of how competitive the Bulldogs are despite losing so much from a year ago.

Wise on what Georgia does well:

Georgia passes and serves the ball well also. The Dawgs’ 1,248 assists are second in the league and are third with 13 assists per set. Almost 90 percent of those assists come from setter Meghan Donovan. The 6-foot-3-inch senior from St. Louis leads the conference with 1,095 total assists and her 11.41 assists per set are third-best.

The Bulldogs average 1.57 service aces per set and, like Florida, have two top-10 players in that statistic in Evans and Brynn Chandler. Entering their match with South Carolina, they have three straight matches of at least five aces.

But, their front line doesn’t do much in terms of blocking balls. The Dawgs are last in the SEC with 1.73 blocks per set. Sage Naves leads them with 82 blocks and their next closest is Kianna Young with 56.

Meanwhile, Florida’s leader in blocks is Lauren Dooley with 90 and second place is Rachael Kramer with 76. The Gators pace the SEC with 2.52 blocks per set.

The Bulldogs aren’t Auburn, Florida will need its A-game to leave Athens with a win and keep pace for the SEC lead.