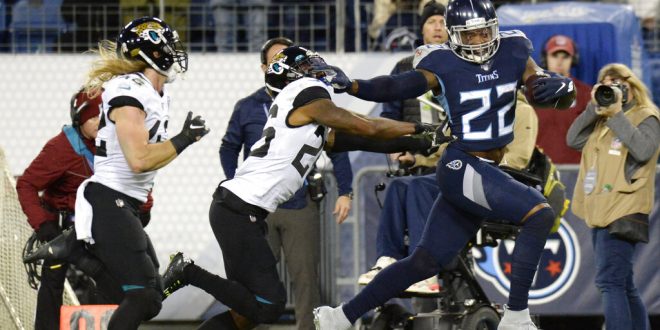 Tennessee Titans running back Derrick Henry (22) runs past Jacksonville Jaguars safety Jarrod Wilson (26) as Henry scores a touchdown on a 74-yard run in the second half of an NFL football game Sunday, Nov. 24, 2019, in Nashville, Tenn. (AP Photo/Mark Zaleski)

Sometimes, a game is said to be a “tale of two halves.”

For Sunday’s AFC South division meeting between the Jacksonville Jaguars and the Tennessee Titans, it was a tale of the third quarter.

The Titans opened up the scoring with a touchdown in the middle of the second quarter. The Jags responded with a field goal a couple minutes before the half ended. Then came the third quarter. What had been a close game exploded into an offensive barrage from Tennessee. The Titans scored four times in just over six minutes — twice on touchdown passes from quarterback Ryan Tannehill; twice on runs from Derrick Henry. The 28-point sprint for the Titans left the Jags down 35-3.

Jacksonville responded with a touchdown and two-point conversion to end the scoring in the third quarter. The Jaguars scored again to start the fourth, but couldn’t complete the two-point conversion attempt. Titans quarterback Ryan Tannehill responded by running in a touchdown of his own to make the score 42-17. The Titans didn’t score again, and they didn’t have to. Josh Lambo kicked a 50-yard field goal to end the scoring. Titans topple the Jaguars 42-20.

When the Jaguars played in Nashville last year, Derrick Henry ran his way to 238 yards and four touchdowns, one of which came on a 99-yard run. On Sunday, Henry ran for a similar 74-yard TD run. He scored two total touchdowns and ran for 159 yards.

Henry’s Jags counterpart, Leonard Fournette, also ran for two touchdowns (both 1-yard runs). He turned 24 carries into 97 yards, and ran for 62 yards on nine passes. But it wouldn’t be enough to compensate for the Titans’ explosive third quarter

Jacksonville quarterback Nick Foles threw for 272 yards and was 32 of 48.

As Fournette conceded after the game, Sunday’s loss likely eliminates the Jags from playoff contention.

The Jags, now 4-7, sit at the bottom of the AFC South. The Titans, now 6-5, are tied with the Indianapolis Colts and will vie for the top spot currently held by the 7-4 Houston Texans.