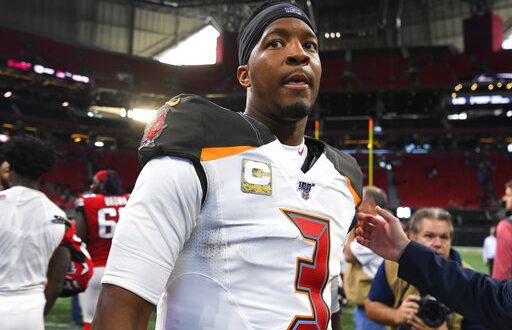 As the Tampa Bay Buccaneers fell behind the Saints by 20 points in the second quarter last week, they decided to abandon the running game. In their 34-17 home loss to New Orleans, the Bucs ran the ball just eight times, making it the fewest in team history. Since 1970, a team has run the ball eight times or fewer just 20 times. All of those teams are teams are 0-20.

The Bucs were trying to find the perfect balance between the running and passing game against the Atlanta Falcons on Sunday. Tampa Bay has an arsenal of weapons for their passing game. However, when the other team knows you just want to put it in the air, that’s when you start to run into trouble.

During their win over the Falcons, 380 of their 489 yards were from their passing game. It’s easy to say that that’s their bread and butter.

“Staying balanced, I thought we ran the ball most of the day pretty dang-gone good,” Buccaneers head coach Bruce Arians said. “Especially Peyton at the end was running it hard and that gives us a chance for play-action.”

Their success of executing play-action was due to their strong running game.

Peyton Barber had 15 carries for 66 yards that created opportunities for the Bucs. Barber is averaging 3.4 yards on a carry and scored four touchdowns on the season.

Defensive Side of Things

Since the Falcons made switches to their defensive staff during their bye week three weeks ago, they’ve allowed an average of just 64.5 rushing yards in the past two games.

Lavonte David led the defense with 9 total tackles to make his total on the season 84. He was followed by Adarius Taylor’s 7 tackles.

Tampa Bay’s next game is this Sunday as they head to Jacksonville to face the Jaguars.