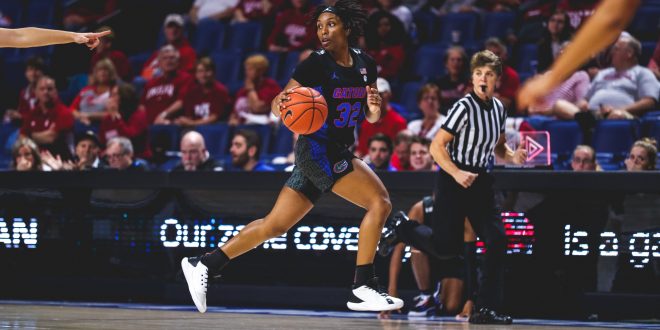 After a tough loss against 18th ranked Indiana, the Gator women’s basketball team will face a bigger challenge when they host number 12 Florida State for a sunshine showdown Tuesday night.

This will be the 76th time these rivals will meet with the Gators having the edge 42-33. But even with this record, the Gators have dropped the last three games against their in-state rival.

The game is set to start at 6pm at the Exactech Arena at the Stephen C. O’Connell Center.

The Gators showed a strong defensive front against Indiana, limiting their scoring to 73 points, the lowest scoring output for the Hoosiers this season. Despite the Gators losing, a strong defense was seen on the court along with the same fast-improving offense seen in the first games.

This offense is led by veteran junior guard Kiki Smith who tied her career high with 18 points. Alongside her is sophomore guard Ariel Johnson who scored 10 points against IU and tied her career-high with four steals.

Redshirt senior forward Zada Williams also plays a part in the Gators’ strong season. She is averaging 9.6 points, leading her team with a .647 shooting percentage. Williams also has a team-best rebound average with 6.8.

On the other side of the ball, Florida State enters the court with a perfect 5-0 record. A trio of double-figure scorers lead the Noles.

The Noles come in to this game with a completely veteran roster, returning with every single player from last year’s the 24-9 team. The team, under the coaching of 23rd-year head coach Sue Semrau, was picked to finish third in the ACC Preseason Coaches Poll.

If the Noles are successful on Tuesday, Wolfok and Ekhomu would become the first senior class to never lose to the Gators.

The Noles are also looking for their fifth 6-0 start to the season in the last decade and a win would also help them tie for the second-most consecutive wins over their rivals.

Camila is a senior at the University of Florida, who served as a beat writer for the women's basketball team from 2019 until the 2021 season. She was also a beat writer for the Gators football team during the 2020 season. Camila is also WUFT's news director as well as a sports reporter/anchor.
@CamilaMaffuz
Previous NBA: Pistons Use Big Second Half to Down Magic
Next Lamar Jackson Makes Another MVP Statement in Ravens Blowout Win Over the Rams