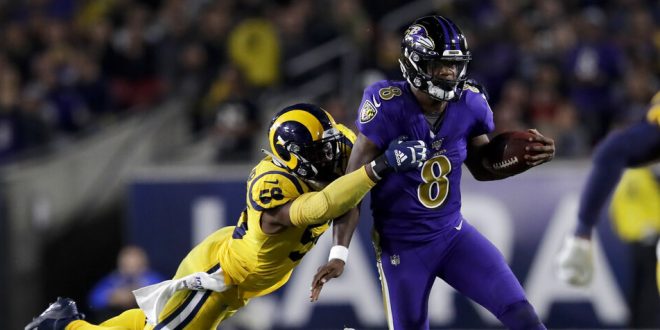 If there was anyone that still believed Lamar Jackson is not the MVP front runner, Monday night’s 45-6 stomping of the Rams was for them.

The Ravens only had the ball four times in the first half. The 22-year-old Jackson led them to four touchdowns, and the ball never hit the ground. Going 9-9 and three touchdowns while also continuing his threat as a runner, the Rams had no answers.

Connecting with rookie speedster Marquise Brown on the first two possessions reminded everyone how dynamic this offense is. The Ravens may be a ground and pound team, but they have one of the fastest players in the league lined up outside that teams must account for.

On the lone touchdown that Jackson didn’t score, he set up. After a fumbled snap, Jackson took off for a 35-yard gain. Sprinting towards pay dirt, Jackson stumbled on a cut at the one. Mark Ingram capped the drive off on the next play.

It’s impossible for the Ravens’ potent offense to go unnoticed. However, the defense is quickly hitting their stride at the right time. Baltimore has kept opponents to 20 points or less in their last six games. That includes the Seahawks, Patriots, Texans and now the Rams.

New additions and players getting healthy have made the Ravens one of the most complete teams in the league. Cornerback Marcus Peters, who they acquired from the Rams earlier this season, picked off Jared Goff, his former quarterback.

Shortly after, veteran corner Jimmy Smith, who recently returned from injury, picked off the Rams in the closing minutes to ensure they would not score the second half.

While the defense continued to overpower a Sean McVay led offense, Jackson continued his impressive game. He ended the night 15-20 for 169 yards and five touchdowns. Add in his 95 yards on the ground and he outgained the entire Rams offense 264-221.

Last February the Rams were trying to figure how their high powered offense was completely shut down in the Super Bowl. Three quarters through this season and people are realizing that the issue has not gone away, but grown.

Whether it’s Todd Gurley not being 100%, Jared Goff regressing or the offensive line not getting the job done, the problems are severe. The Rams front office risked a lot of draft capital and cap space for this roster.

Players like Aaron Donald, Goff and Gurley eat a lot of cap. Trading two first-round picks for Jalen Ramsey puts this team in long term trouble. The Rams haven’t selected a player in the first round since they selected Goff first overall in 2016. Barring a trade, they will not pick in the first round again until 2022.

Relying on big-name free agents and blockbuster trades can work in the short term, but has consequences.

Baltimore has had arguably the toughest stretch of games going back to their Oct. 20 matchup with the Seahawks. They have breezed by the competition. However, heading into December, it does not get any easier. Next up, the 10-1 San Francisco 49ers. The 49ers are a dominant defensive team with a strong rushing attack.