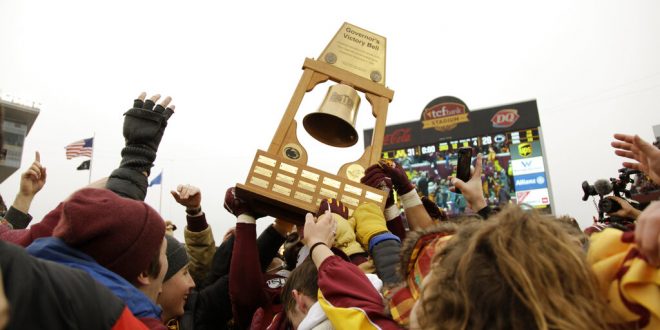 FILE - In this Nov. 9, 2019, file photo,Minnesota fans gather on the field reaching toward the Governor's Victory Bell after Minnesota beat Penn St. 31-26 during an NCAA college football game in Minneapolis. Fans of Minnesota's Golden Gophers are enjoying football success the team hasn't seen in decades, and daring to dream of a trip to Pasadena. (AP Photo/Stacy Bengs,File)

College GameDay to Head North For Minnesota vs. Wisconsin

College GameDay will be making history on Saturday when the team heads to Minneapolis for the Minnesota Gophers vs. Wisconsin Badgers game. For the first time in the popular pregame football show’s 30 years, College GameDay will visit Dinkytown on November 30. This year, the No. 10 Gophers take on the No. 12 Badgers in a match-up almost 130 years in the making. The winner of this Saturday’s game brings home not only bragging rights but also “Paul Bunyan’s Axe“.

Despite a slow start and almost a season-ending game for Wisconsin, the Badgers managed to pull victory away from the Purdue Boilermakers. Wisconsin allowed 4 turnovers to the Boiler’s -defense, but Purdue couldn’t capitalize on more than 1 of them. Purdue was subject to a 27-yard touchdown in the first drive of the day courtesy of Wisconsin’s  Aron Cruickshank.

Aron Cruickshank with a 27 yard TD run for the #Badgers pic.twitter.com/L0XWFUGTma

Jack Coan played effectively against the Boilermakers on Saturday, but the Badgers’ quarterback struggled to protect the football. Coan threw 1 interception and had 5 fumbles, 3 of which Wisconsin lost. A mistake like that can make or break a team, especially going into a big rivalry game.

What UW has going for it is its use of non-traditional players. Tailback Jonathan Taylor racked up 222 rushing yards against Purdue, giving Minnesota’s defense plenty to think about in the ground game.

Gophers Hold Out Against Northwestern

Minnesota has been undefeated for 9 weeks now. Last week, quarterback Tanner Morgan put on an excellent performance for the Gopher crowd, securing a 38 – 22 win over Northwestern.

Tanner Morgan got the Gophers back on track this past weekend. pic.twitter.com/yg1pGKC8Oq

Morgan’s favorite receivers. Both Tyler Johnson and Rashod Bateman played great games on Saturday as well, completing 7 catches each. Johnson received for 125 yards and a touchdown while Bateman caught for 78 yards and 3 touchdowns.

The winner of this game between Minnesota and Wisconsin will not only win the “Axe”, but they’ll earn the Big Ten West title and a chance at No. 1 in the Big Ten East, Ohio State. The Gophers and Badgers will kick off at 2:30 p.m. on Nov. 30 in Minneapolis.