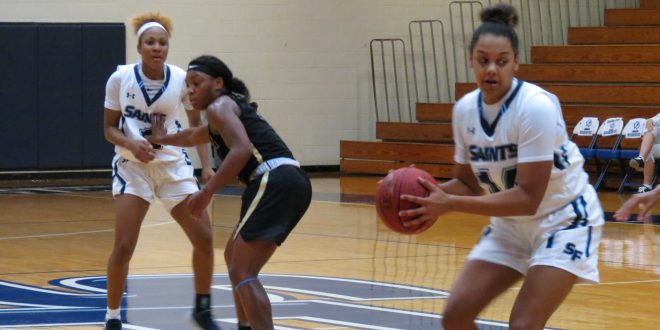 Santa Fe College women’s basketball showed perseverance in their match up against the Chipola College Indians at home on Tuesday. The Indians are ranked #7  in the NJCAA Division 1 Women’s Basketball Rankings which makes them a tough team to navigate. Despite their efforts, the Lady Saints fell to the Indians with a final score of 92-71.

The Saints started the game aggressively and were able to maintain the lead in the first quarter and some of the second quarter. The half ended with the Saints only three points behind. But the Indians readjusted and soon took control in the second half as they grew the scoring gap larger until the very end.

Chipola College’s coach Franklin said, “In the first half we couldn’t throw one into the ocean if we were standing on the beach. But, we made some shots and rushed them and sped the game up a little bit which led us to some easier shots.” Tuesday’s win put the Indians with an overall record of 9-1.

Game leaders for Chipola included Rachel Johnson who contributed 19 points, Ariel Cummings with 18 points and 16 rebounds and Isadora Sousa with 10 points and 12 assists.

In contrast, the Saints put up a battle in the first half that showed Coach Chanda Stebbins the potential the 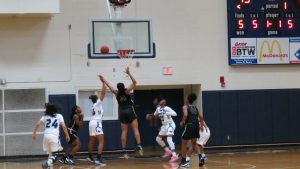 team has. “I feel like everyone brought a lot of energy and I think this was the best game we’ve played as far as understanding the scout. I know the score doesn’t show it but we took a lot of things forward today and got better as a team. This will prepare us for January and February. I don’t want us to be too critical of ourselves.”

Game leaders for the Lady Saints was Aleish Curry who contributed 13 points and eight rebounds and Lauren Carmona with 10 points. Lastly, Yaire Rodriquez and Danasia Bogle both had eight points each.

The Lady Saints will be looking to raise there overall record of 5-5 to a winning one against Hillsborough Community College on December 3 at 7:30 p.m.  Coach Stebbins hopes her team wil continue to get better.  “These next practices we need to keep being versatile enough to understand guarding a driver versus a shooter.”

Parker Welch is a Junior at the University of Florida majoring in Sports Media at the College of Journalism & Communications.
@parkerrwelch
Previous NFL Preview: Thanksgiving Day
Next Alabama and Auburn Prepare for Iron Bowl Matchup