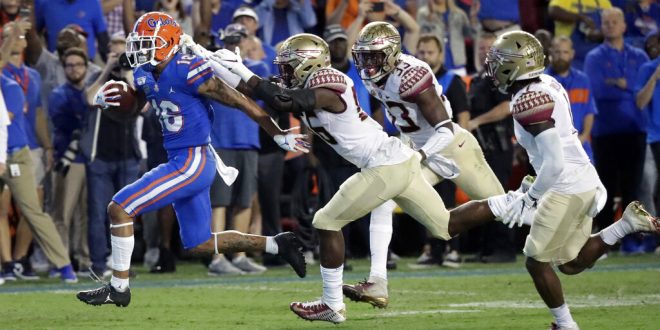 The Gators’ senior saturated roster went out in style on Saturday night as Florida did something no Gator team has done since 2009: Beat Florida State in The Swamp.

And they did so in a convincing 40-17 torching of the ‘Noles in a game that saw seniors make a lasting impact.

Composed of Freddie Swain, Josh Hammond, Tyrie Cleveland and Van Jefferson, Florida’s tight wide receiver room will take a massive hit as those four leave the program after this season. And Saturday’s performance from the group showed exactly why that is.

In respect for the senior celebration, all four seniors started the game — something that isn’t typical.

Freddie Swain really got things going for the dynamic group when he caught a 19-yard pass from Kyle Trask on the Gators’ opening drive.

To make things sweeter on senior night, Swain added another touchdown to his stat line a quarter later as he tip-toed down the Florida sideline and into the end zone from 23 yards out.

Freddie Swain hit em with a "get off me, lil buddy" and the Gators lead 20-7! pic.twitter.com/8DCLtZmAaS

The other senior wideout to reach the end zone was Van Jefferson.

With five catches, two went for scores — one from 13 yards out and one from six yards out. The six-yarder came from the hand of Emory Jones midway through the third quarter to put the Gators on top of the rival ‘Noles 37-10.

While Swain and Jefferson were the only two senior receivers to score on Saturday, every senior got a handful of touches.

Tyrie Cleveland, who broke his collarbone against FSU last season, hauled in four passes for 44 yards. He also broke free on a kickoff return in which he was shoestring tackle away from scoring on. As for Josh Hammond, also known as ole reliable, he took in three receptions — good for 39 yards.

However, perhaps the most glaring part of the game for the senior receivers is that none of them complained about lack of touches or lack of scoring — something that has been true of each of them all season long.

For a guy that has been a part of the Gator football program for just a single season, Jonathan Greenard received quite the ovation when his name was called during the senior celebration. And while perhaps that might be surprising considering his time — or lack thereof — at Florida, those who have watched the grad-transfer understand the fans’ salute.

And in Greenard fashion, running out of the tunnel wouldn’t be the only time he got The Swamp riled up.

In a game in which the Gators tallied eight sacks, Greenard was accountable for three of them. One of them being on former teammate at Louisville, Jordan Travis.

Just before halftime, Greenard shot around the right end of the Florida State offensive line and plowed through Travis — forcing a fumble.

Mr Travis, allow me to introduce you to Jon Greenard pic.twitter.com/Dk9vz3QMqP

However, Greenard said that he and Travis have no hard feelings after the play that erupted The Swamp.

Despite the success, Greenard was without his senior counterpart, Jabari Zuniga. Zuniga, who has battled the injury bug all season, sat out Saturday’s game against the Seminoles.

Seniors in the shadows

With the receivers and Greenard showing out, other seniors were left in the shadows.

The full list of Gator seniors celebrated Saturday night is as follows:

Order the seniors were announced pic.twitter.com/HmhYU8jOFr

Ainslie is a journalism major at the University of Florida where she specializes in Sports Media. Her main passion is college football as it was a huge part of her childhood. Ainslie serves as a current correspondent for the Ocala Star-Banner, a newspaper for the Ocala, Florida area. She currently covers Marion County high school sports.
Previous Gators Chomp the ‘Noles for 10th Win
Next Feleipe Franks Announces He’s Leaving Florida