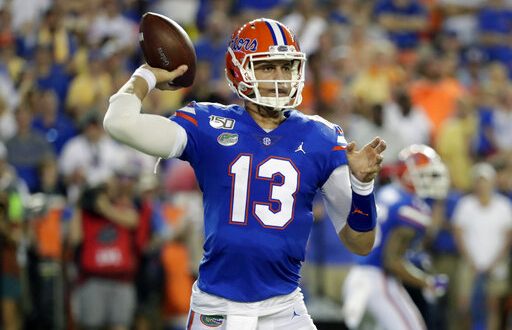 The former starting quarterback announced on Instagram he is leaving the Florida football program. Franks was sidelined for most of the season with an ankle injury that he suffered in the Gators’ win over Kentucky back in September.

With his departure from the program, Franks said he will either enter his name for the NFL Draft or transfer to continue his college football career.

In his statement on social media, Franks expressed his gratitude to playing for the Gators.

“My heart will always be a part of the Gator family,” Franks said.

He also thanked Gators head coach Dan Mullen and quarterback coach Brian Johnson for putting their trust in him.

The now former Gators quarterback signed the statement, “Once a Gator, always a Gator.”

Franks leaves a complicated legacy at the Univeristy of Florida. It started on a high note with the famous last-second touchdown to receiver Tyrie Cleveland in the win over Tennessee in 2017. Then, the rollercoaster ride began. Franks was benched toward the end of that season for Malik Zaire in a season that only saw four wins. The team also fired head coach Jim McElwain midseason.

Under new head coach Dan Mullen, Franks saw his game improve. Despite this on-field improvement, Franks still showed inconsistencies. In the homecoming loss to Missouri, Franks was benched again amid a bararge of boos from the home fans. He would remain the starter after Kyle Trask suffered a foot injury the following week.

Not too often you see a guy shush his own fans.

Feleipe Franks just did that. pic.twitter.com/cIXCb1kJjl

Franks had another memorable moment in the Swamp when he orchestarted a 17-point comeback win over South Carolina. He scored the eventual game-winning touchdown on the ground from one yard out on fourth down. Before the heroics, there was also the infamous shushing of the crowd in the second quarter.

After only throwing for 1,438 yards and nine touchdowns the year prior, Franks finished the season 2,457 yards passing and 24 touchdowns. He was also named Offensive MVP in the team’s Chick-fil-A Peach Bowl win over Michigan.

Heading into the 2019 season, the Florida offense was expected to kick things into high gear. However, this wasn’t the case. The Gators struggled against the Miami Hurricanes, despite picking up the 24-20 win in the season opener. Franks not only drew criticism for his play, but also his antics. This included posing after picking up the game-winning touchdown with eight minutes left and talking into the ESPN cameras saying, “I do this! Stop playing with me!”

In his final start in Ben Hill Griffin Stadium against UT-Martin, Franks finished with the highest completion percentage in Florida history with 92.9 percent.

Franks’ time in Gainesville was a complex one that came to an end due to unfortunate circumstances.

What’s Next for Franks?

With Franks leaving the University of Florida, he has multiple options for his next step. As stated above, he said he will either enter the NFL Draft or transfer to another school. Franks also has baseball as an option. He was drafted by the Boston Red Sox in the 31st round of this year’s draft.