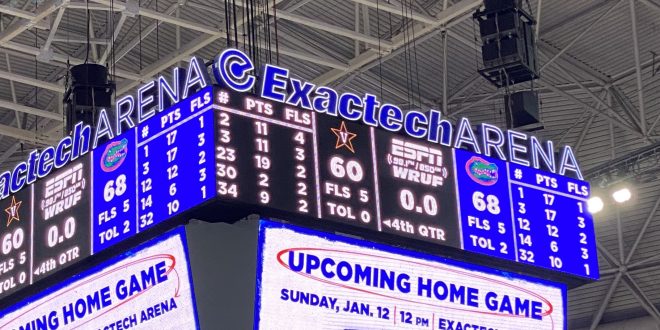 The Florida women’s basketball team started off the new year with its first SEC home win of the season.  The Gators defeated Vanderbilt 68-60 Sunday to notch their first home win and SEC win of 2020.

Four Gator players were in double figure scoring, including Lavender Briggs with 19 points.  KiKi Smith added 17, Ariel Johnson and Zada Williams each chipped in with 10 points each.

The game went back and forth, with each team trading baskets, until Vanderbilt went up 27-15 in the second quarter.

Fast forward to the fourth quarter, the Gators were again able to go on an 8-0 scoring run to go up 63-54 with two minutes left in the game,  putting the icing on the cake.

The starting rookie guard nailed big-time jumpers to help give momentum to the Gators, finishing with 19 points.  This game marks the 13th straight game for Briggs with double figures in scoring.

Smith did a little bit of everything. She shot 50 percent from the field, with 17 points, five assists and four rebounds. Smith was able to dance her way through the Vanderbilt defense and handle the full-court press pressure, facilitating the ball well.

The Gators scored almost half their points in the paint with 32. Florida finished with 15 offensive rebounds, allowing for 12 second-chance points.  The Gators made 14 of 29 layups with great drives to the basket that allowed them to make a comeback in the first-half and maintain their lead in the second half.

Next up, the Gators will head to Auburn to take on the Tigers on Thursday.