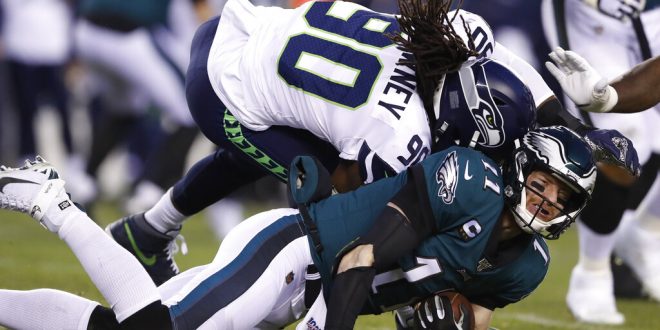 He delivered one, albeit somewhat controversially, in Sunday night’s NFC Wild Card game between the Seattle Seahawks and Philadelphia Eagles.

A concussion he sustained on the Eagle’s second possession forced Wentz out of his first career playoff game, and the Seahawks would go on to win the game 17-9 at Lincoln Financial Field. Four passes, one completion and three passing yards. Unfortunately — and even more so for Eagles fans — nothing else can be written about Wentz’ playoff debut.

Now, Pete Carroll and the Seahawks prepare to face a formidable foe next Sunday: The Green Bay Packers at Lambeau Field.

The Eagles up-and-down, 9-7 season comes to a bitter close, but the appearance marked its third straight in the playoffs under head coach Doug Pederson.

“I feel bad for him … I’m disappointed for him. I wanted this for him.”

Doug Pederson comments on Carson Wentz leaving the game due to injury. pic.twitter.com/kzqmZb5S8g

After the game, Clowney was apologetic regarding the helmet-to-helmet hit.

Things could’ve fallen apart for Philadelphia after Wentz’ early injury. They didn’t, in large part, because of Josh McCown‘s performance. The 40-year-old veteran completed 18 of 24 passes for 174 yards. However, he was under pressure all night from a Seahawks’ defense with a point to prove.

McCown was also sacked on six separate occasions, and Philadelphia never managed to get the ball into the end zone. They were within one score almost all game, but failed to capitalize on a 1st and 10 from Seattle’s 13-yard line with 3:56 left.

McCown brought composure and poise to an Eagles offense that badly needed it. While he also provided an energy lift, it wasn’t as dynamic as those that Eagles’ supporters have come to see from Nick Foles in the past.

Sunday’s result is reminiscent of the 2013-2014 years for the Seahawks. Immaculate play from Wilson, a daunting defensive performance and Lynch. Even only a few months ago, almost nobody would’ve predicted that all three of those would once again be a winning recipe.

On top of that, Seattle will get set to renew their old NFC rivalry with Aaron Rodgers and the 13-3 Green Bay Packers in the divisional round.

Carroll spoke about Lynch’s play after the game.

While Lynch wasn’t entirely effective on Sunday (6 carries, 7 yards, touchdown), his touchdown and other tough runs demonstrated his value. However, there are still questions surrounding Seattle’s ground game.

As a team, the Seahawks gained just 64 yards on 26 carries (2.5 yards per carry). Wilson accounted for 45 of those yards himself.

The Seahawks needed a big-time performance from someone on the outside in Philadelphia. Man did they get it from rookie receiver D.K. Metcalf. The first-year wideout had 7 catches, 160 yards and a touchdown in the win. Metcalf will be instrumental to the Seahawks’ offense in Green Bay, as Tyler Lockett (4 catches, 62 yards) will once again garner a lot of attention.

Next Sunday’s subsequent edition of the Packers-Seahawks rivalry is set for 6:40 p.m. ET.

As for the field, no teams from the AFC or NFC East divisions remain.