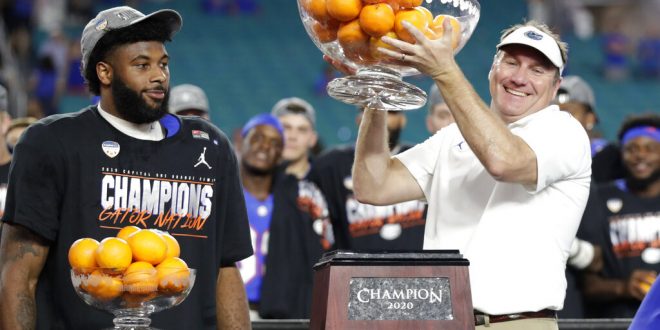 Florida football has secured yet another Orange Bowl championship title in its 36-28 win over Virginia. The Gators are now 4-0 in the Orange Bowl all-time, with their last appearance being in 2002.

Florida totaled 549 yards with a season-high of 244 rushing yards over the Cavaliers. Gators quarterback Kyle Trask capped his first season as Florida’s starter, throwing for 305 yards and scoring a rushing touchdown.

The Virginia offense and quarterback Bryce Perkins tried to keep up. Perkins threw for 323 yards and four scores.

With this win, the Gators have now posted their first 11-win season since 2012. In just two years as Florida’s head coach, Dan Mullen has led the team to 21 wins.

“This is why these guys came to Florida: to play in big games, to play on the biggest stage. To be one of the best programs in the country. If you want to build to be a championship program, you have to win consistently.” said Mullen, “Look at the guys who made the playoffs this year. They’re not teams that just came out of nowhere that haven’t been winning and finally won. They’re teams that were all in New Years Six Bowl Games last year.”

Mullen noted that the work on January 6th will begin this team’s preparation towards a 12-win season in 2020.

Lamical Perine showed out in his final game as a Florida Gator. Within the first minute of the game, he scored a 61-yard rushing touchdown. His two rushing touchdowns earned him a career-high of 138 rushing yards.

Perine scored a total of three touchdowns totaling 181 yards rushing and receiving. He came into the game with a total of only 538 rushing yards over 10 games with Florida’s pass-heavy offense.

The Gators will open the 2020-2021 season on September 5th against Eastern Washington.