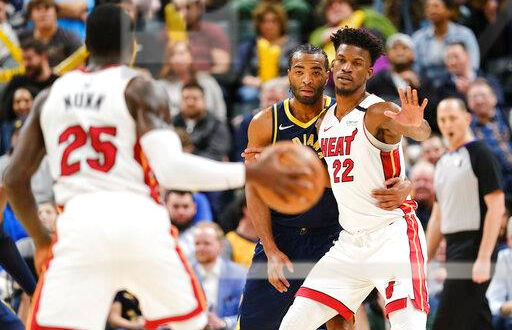 After a few dormant years, it seems apparent that the rivalry between the Indiana Pacers and Miami Heat is back.

The Miami Heat had a sweet road victory over the Indiana Pacers Wednesday night, defeating them 122-108.

Miami was led by Tyler Herro’s 19 points and 7 rebounds, while the Pacers were led by Domantas Sabonis’s 27 points and 14 boards.

The Heat destroy the Pacers in Indiana 122- 108 the final. They led by as many as 31. Miami was 10-46 all time in the regular season at Indy entering the game. The Heat improving to 27-10 on the season. Sweet kiss, goodnight. pic.twitter.com/xlZt6vfIyZ

Miami was led by rookie Tyler Herro’s 19 points and 7 rebounds and Jimmy Butler’s 14 points and 6 boards.

The Heat now have a 27-10 record and sit at the second spot in the Eastern Conference standings.

Their next game is scheduled for Friday at 7:30 p.m. against the Brooklyn Nets.

The Pacers were led by a huge game from Domantas Sabonis, who posted a double-double with 27 point and 14 board performance.

The Pacers now have a 23-15 overall record and are sixth in the Eastern Conference standings.

Their next game is scheduled for Friday at 8:00 p.m. vs the Chicago Bulls.

Heat player Jimmy Butler got into a scuffle with Pacer’s player T.J. Warren.

The incident took place during the third quarter. The Heat were leading. Miami was putting the game away, when Warren fouled Butler hard during his drive to the basket.

The result was a verbal confrontation between the two players, leading to a double-technical foul call.

One play later, Butler got called for an offensive foul after pushing Warren. Warren then mocked the referees which led to his ejection.

T.J. Warren and Jimmy Butler are not on good terms.

Warren got tossed after this scuffle.pic.twitter.com/wNKmNbZHEk

After the incident occurred, Jimmy Butler blew him a kiss and later took to Instagram to let Warren know how ready he is for their next match up on March 20.

Both players are expected to be fined sometime soon following the game, as the NBA cracks down on confrontation. Last season, both Myles Turner and Anthony Davis were fined $15,000 for giving the middle finger.