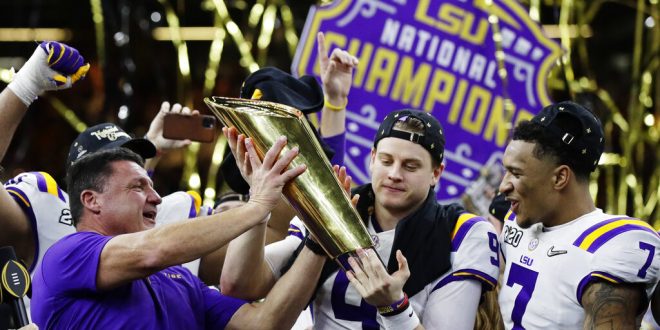 As LSU quarterback Joe Burrow took a knee on his final snap of the College Football 2020 National Championship Game, he added another title to the long list of accomplishments he achieved this season; national champion.

It was Tigers versus Tigers and LSU proved victorious defeating Clemson 42-25.

A number one team had never won the National Championship Game but Burrow and the LSU Tigers did it, bringing home a title that has not found its way to Baton Rouge since 2007.

The pounding LSU defense and electric offense were no match for the Clemson Tigers in New Orleans as LSU brought down the defending national champions.

Early on, both defenses showed up to the Super Dome in New Orleans, but LSU had a harder time warming up to Clemson defensive coordinator Brent Venable’s defense. But when they did, there was no stopping the LSU offense.

The start of the game was a battle of the defenses. Back and forth three and outs and hard tackles were a big part of the first quarter.  That was until quarterback Trevor Lawrence and Clemson led a strong drive to score the first touchdown of the game. And LSU had no answer on the next drive.

One drive later though, LSU got on the board with a long 52-yard touchdown pass from Burrow to Ja’Marr Chase.

Clemson kept its momentum from the first quarter and scored on their first two possessions of the second quarter to put them up 17-7. LSU hadn’t been down by double digits the whole season.

Chase was preparing himself to have a game though with his second huge catch of the night to put LSU in the end zone and another LSU score gave the Tigers their first lead of the night at  21-17. And to end the half, LSU would extend its lead by another seven points and went into halftime up 28-17.

The momentum from the first half did not carry into the second for LSU though and a three and out turned into a touchdown with a two-point conversion for Clemson to make the score 28-25.  The next drive was not ideal for LSU either after a three and out following a sack and a near interception. This marked LSU’s fourth three and out of the game.

But things got going again later in the third quarter for LSU after another long catch for Chase and Clemson’s star linebacker James Skalski was ejected for targeting. A quick pass to tight end Thaddeus Moss, the son of NFL Hall of Famer Randy Moss, put LSU ahead 35-25.

With that touchdown, Joe Burrow set an NCAA FBS single-season record for touchdown passes with 59 on the season; another accolade to add to his record setting year.

To start the fourth quarter, LSU scored another touchdown from Burrow to Terrace Marshall Jr. to bring the score to 42-25. Clemson could do very little offensively and the Tigers had a touchdown called back because of offensive pass interference, followed by a fumble from quarterback Trevor Lawrence on the next drive with just under four minutes left to play.

LSU held on, and they got a national championship in record setting fashion…another one for the SEC.