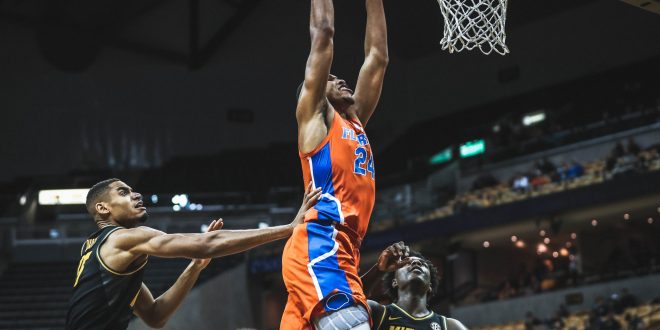 After losing in spectacular fashion this past Saturday to Missouri, the Florida men’s basketball team returns home to face the Ole Miss Rebels Tuesday night.

In Columbia, the Gators dropped their first SEC game and lost by the largest margin of the season against the Tigers. Missouri shot a season-high 63% from three-point range and 62% from the floor. At one point, Florida trailed the Tigers by 24 points and eventually lost 91-75.

The Rebels (9-6, 0-2 SEC) are looking to grab their first conference win of the season. Ole Miss has had its struggles this season, losing to No. 16 Memphis, No. 24 Butler, and No.24 Wichita State. Florida also lost to Butler in December 76-62.

Ole Miss’s leading scorer is Breein Tyree, a 6’2″ junior from New Jersey. Tyree averages 17.8 points per game and is a threat from three-point range. Against Middle Tennessee, he scored 34 points and hit 8 threes.

Tyree along with Devontae Shuler average over 30 minutes per game. Against Texas A&M, Shuler played all 40 minutes of the game and had 12 points, five rebounds, and six assists.

“Breein Tyree is just fantastic,” Gator head coach Mike White said. “I think he and Shuler represent one of the better open floor back courts in our league for sure. Really good team speed and quickness.”

White does not want to dwell on Florida’s loss to Missouri. According to him, they are moving on quickly.

“I just don’t think it’s in our best interest [to dwell on Missouri] to give ourselves a chance against the Rebels. I just think that we, we gotta turn a page,” he said on Monday.

Florida did not have a choice but to move on quickly. The team was stuck in Columbia for another night as they weathered a snowstorm. This, in turn, gave the Gators a short turnaround to come back to Gainesville and get ready for Ole Miss.

White does not think that the quick turnaround will affect his team. According to him, the team’s mental preparedness has become more important than ever.

“These guys are in shape at this point. We’re in high-level shape, both teams will be. We just don’t have a ton of time to do stuff physically but they don’t either. Mental approach to these things are as important as anything,” he said.

According to Florida’s Noah Locke, the Ole Miss back court has been a big point in the scouting report. Locke says that the Rebel guards score well in transition and Florida will have to fill their gaps when Ole Miss attacks the rim.

Winning against Ole Miss would secure White’s 100th win as Florida’s head coach. According to Locke, he’s motivated to get him that win.

“He’s worked really hard. He always tells us the right things. He tries his hardest to make sure that we have every piece of everything to win games. For him to get that, that would be awesome for him,” -Locke said.