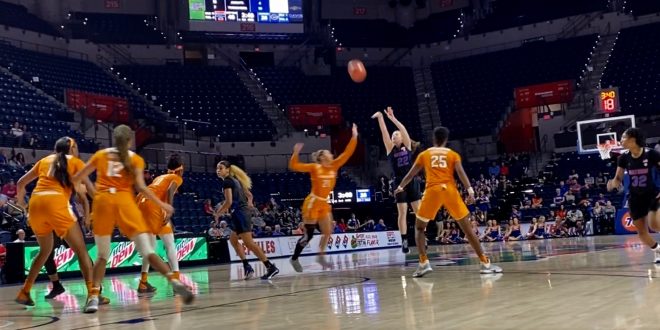 The Gator women’s basketball team is now 2-3 in conference play after losing 78-50 against No. 24 Tennessee at home on Thursday night. The Gators are now 0-5 against ranked teams, and are scheduled to play another one in Texas A&M on Sunday.

Florida has showed improvement on both sides of the ball but it was still not enough to top Tennessee’s strong roster. The Lady Vols big roster hurt the Gators, as Tennessee averages six-foot-two inches in height among their players. Freshman guard Jessie Rennie is the only Tennessee player that’s under six-feet tall.

With Paige Robinson and Emer Nichols not on the court for the Gators, they only had Zada Williams and Faith Dut doing all of the work in the paint.

Florida turnovers played a big role on Tennessee’s victory as they scored 27 points from Gator turnovers. Last game against Kentucky, the Gators recorded 27 turnovers. On this game they had 16.

Florida head coach Cam Newbauer recognizes that this is something they really need to fix.

“We have to get better in that area. That’s one area that has really been our Achilles heel, just getting sped up at times.”

Even though they competed against a roster full of height, the Gators were able to out rebound the Lady Vols going into the second half. Tennessee eventually caught up but were only able to top the Gators by four (39-35).

Freshman guard Brylee Bartram led the Gators in scoring for the first time in her career with 11 points. She tied her career-high in scoring and was able to get a rebound and an assist.

The Gators started off strong taking an early 6-2 lead. But the Lady Vols responded quickly and had a 15-3 run to finish the quarter up 17-9. Davis topped this quarter in scoring, getting 10 points in the first.

Tennessee started the second quarter hot, getting a 7-0 run that forced a Gator timeout. The Lady Volunteers continued to extend their lead, leading by as much as 20 points.

The Gators struggled once again opening the third quarter as Tennessee ripped off an 8-0 run.   Bartram ended the scoring drought with a shot from behind the arc. Florida was only able to get nine points in this quarter, five coming from Bartram.

Bartram scores from behind the arch to add three more for the #Gators pic.twitter.com/HmCgkgn3S8

The fourth quarter was the best scoring quarter for the Gators. They were able to get 17 points in the frame. Bartram got two more three-point buckets in this quarter.

At the end, the Gators’ defense and Bartram’s hot shooting was  just not enough to top the Lady Volunteers. But despite the loss both Newbauer and Bartram say that the way they fought says a lot about the team’s character.

Camila is a senior at the University of Florida, who served as a beat writer for the women's basketball team from 2019 until the 2021 season. She was also a beat writer for the Gators football team during the 2020 season. Camila is also WUFT's news director as well as a sports reporter/anchor.
@CamilaMaffuz
Previous Hawthorne Boys Basketball Improves Win Streak to 15 against Chiefland
Next Magic Fall to Clippers in Blowout Fashion