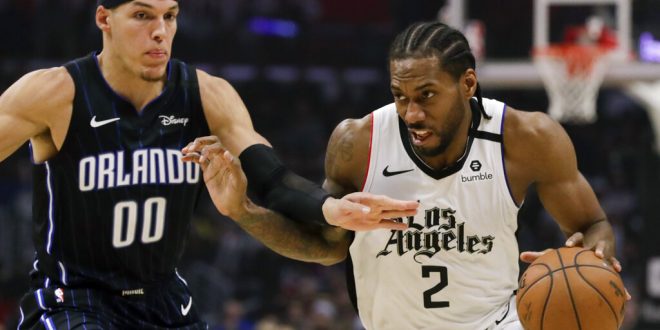 Thursday night’s game gave the Magic the chance to bring their record to .500 on the season, but they struggled to find any rhythm.

Kawhi Leonard led the way offensively for the Clippers with 32 points on 12-of-20 shooting. It was Leonard’s fourth consecutive game scoring at least 30 points. Coincidentally, this game also marked the fourth game Paul George missed with a strained left hamstring. The Clippers don’t have a date for his return, but he will travel with the team for their upcoming road trip.

For the Magic, although Nikola Vucevic turned in 22 points and Aaron Gordon scored 20, it wasn’t enough to keep up with the Clippers. The result is Orlando’s most lopsided loss since their 123-91 defeat to the Milwaukee Bucks in November.

Playing on back to back nights is just a part of the NBA. But at this point season, it would be hard to find two teams you’d want to play less on consecutive nights than the Lakers and Clippers, in Los Angeles nonetheless. Although the Magic were able to end the Lakers’ 9-game win streak in front of a hostile crowd, some fatigue spilled into their tilt with the Clippers.

"We won't beat anybody playing at that intensity level," Steve Clifford.

Coach was happy with the play of @Double0AG but thought their attitude could use some work. He mentioned the PG struggles and the need to bounce back on Saturday. #MagicAboveAll #NBA pic.twitter.com/alNmpCETVu

After hanging tough in the first quarter, the Magic couldn’t keep pace for the rest of the game. The Magic trailed 34-29 early in the second quarter, but from there the Clippers went on a 16-0 run spanning nearly 5 minutes. Kawhi hit 8 of his first 10 shots of the game and cruised to 23 points at halftime, at which point the Clippers led 67-48.

The road ahead for Orlando doesn’t get easier, either. They conclude their road trip with games against Golden State and Charlotte. Additionally, with D.J. Augustin and Michael Carter-Williams both out with injury, the Magic are without a point guard off the bench.

While Kawhi Leonard led his team in scoring, he certainly wasn’t the only one to turn in an impressive game. The Clippers put seven players into double figures in scoring. Montrezl Harrell put up 21 points and JaMychal Green recorded 11 points and 13 rebounds.

The Clippers have a tough road stretch coming up, with games against the Dallas Mavericks, Miami Heat and L.A. Lakers. They hope to operate with Paul George at some point, but there is still no timetable for his return.