Home / Basketball / Gator Women’s Basketball Falls On The Road Against No. 12 Aggies 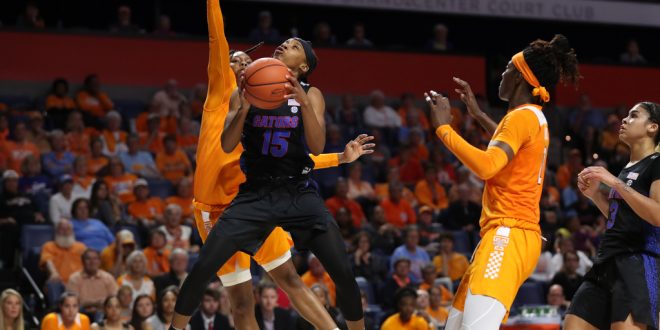 The Gator women’s basketball team falls to 2-4 in SEC play after losing on the road Sunday to 12th ranked Texas A&M Aggies 69-42.

This was the 11th time the teams have faced off against each other and Florida has only been able to win one time.  The only time Florida beat TAMU was at home back in 2016 where the Gators had an 83-81 victory.

The Gators fell to 11-7 with the loss but it is still an improving team.  Six of their seven losses have been against ranked teams. Their other loss was against Wake Forrest who, though not ranked, is fourth in the ACC.

Florida has veterans like red shirt junior guard Kiki Smith and red shirt senior forward Zada Williams. Smith is having one of her best seasons coming into the game, averaging 13.4 points per game. Williams has also been a key player, leading her team in rebounds with an average of 7.7 per game.

Along with them is freshman guard Lavender Briggs who has been a strong addition to the program. Briggs reached her 15th game scoring 10 or more points against the Lady Vols last Thursday.

Sophomore guard Ariel Johnson and freshman guard Brylee Bartram have helped in the Gators success. Johnson has reached double figures in various games and has a career high of 16 points.

But in this game, points were hard to come by for Florida.  In fact, neither team lit it up offensively and at the end of the first quarter, it was tied 8-8.  But after the Aggies won the second quarter 23-11, they took a lead they never gave up.   Florida was led by Brigg’s 14 points while Zada Williams was the only other player in double figures with 11 points.

The Aggies with the win are now 15-3 and 3-2 in league play.  Part of TAMU’s struggle with SEC teams is the void left by Chennedy Carter who suffered an injury against LSU and has been out since.

The Preseason Player of the Year had started all 16 games prior to their match up against Kentucky. She leads her team and is second in the SEC scoring an average of 21.9 points per game. She also leads the nation in field goal attempts, and has scored 1,800 points in her collegiate career.

In this game, two A&M players had double-doubles N’dea Jones had 19 points and 11 boards while Ciera Johnson had 16 points and 10 rebounds.

The Aggies came into the game limiting opponents to 56.6 points per game and only a 37.7 shooting percentage on average. They also know how to handle the ball as they rank top three in assists and assist to turnover ratio.

TAMU is under the leadership of 17th season College Station head coach Gary Blair. He has led teams to winning records in 33 of his 34 seasons overall. Blair also became the fifth active head coach to surpass 800 career wins back in December.

Camila is a senior at the University of Florida studying Telecommunications with a specialization in production and a minor in Innovation. She is also seeking a Sports Management certificate. Camila is also WUFT's news director as well as a sports reporter/anchor.
@CamilaMaffuz
Previous Gators upset No.4 Auburn with freshman Omar Payne with career high
Next Gators Take a Tough Loss on the Road to No.12 Texas A&M

The Florida Gators women’s basketball team got their second straight conference win of the season. …