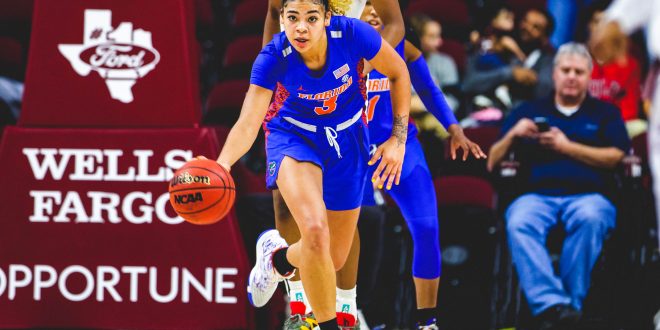 Matching up with a top 25 team was not an easy task for the Florida women’s basketball team.

Despite the loss, the Gators had three players score in double figures in this match up.  Leading the team in scoring for the season and for this game is freshman Lavender Briggs who came out hot and ended the game with 14 points and 11 rebounds. Briggs has been impressive for the Gators this season, as this is the 16th time this year she has scored in double figures to go along with her fifth double-double of the season.

Following behind was Zada Williams with 11 points and Nina Rickards adding 10 points and five rebounds.

The Aggies were also without star player Chennedy Carter who suffered an injury in a game against LSU but on this day, the Aggies had several players who had excellent games.

Leading scorer for the Aggies was N’Dea Jones with 19 points and 13 rebounds while teammate Ciera Johnson had 16 points and 10 rebounds.  Jasmine Williams chipped in with 11 points while  Kayla Wells added 13 of her own.

The Gators take it back to Gainesville to prepare for another ranked opponent. Florida gets a few days off before hosting Arkansas on Sunday.  This will mark the fifth time the Gators will face a ranked opponent in their last seven match ups.