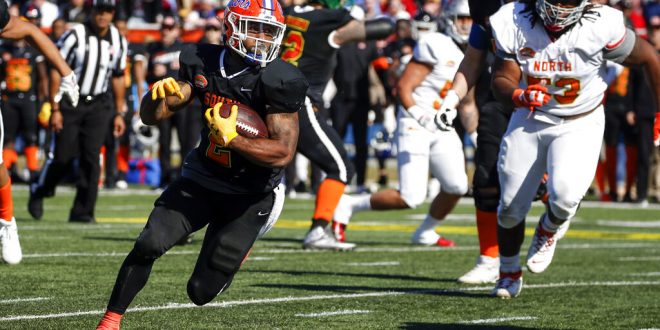 South running back Lamical Perine of Florida (2) carries the ball in for a touchdown during the first half of the Senior Bowl college football game Saturday, Jan. 25, 2020, in Mobile, Ala. (AP Photo/Butch Dill)

Even though the Florida football team is in the midst of the offseason, the players don’t stop making headlines.

Gators in the Senior Bowl

Five Gators took part in the 2020 Senior Bowl in Mobile, Alabama on Saturday. The competition is one of the best chances for outgoing seniors to showcase their skills before the NFL Draft. Lamical Perine, Van Jefferson and Tyrie Cleveland, all offensive stars for the Gators, were in attendance. Jonathan Greenard and Jabari Zuniga represented Florida’s defensive ranks in the cotton state, also. Cleveland and Jefferson got snaps on offense and special teams. Jefferson caught two passes for 11 yards, while Cleveland returned the opening kickoff for 34 yards and did not register a catch.

While his game time contributions were slim, Jefferson nevertheless made his presence felt. He was named the South Team wide receiver of the week for his standout practices.

Perine, on the other hand, had a game to remember. In addition to being named the South team’s running back of the week, he scored the game’s first touchdown when he shimmied his way into the endzone to cap a 16-yard screen pass from quarterback Justin Herbert. Perine ended the day with seven carries for 42 yards and two receptions for 17 yards.

The Gators football team made news off the field on Saturday, too, when Penn State receiver Justin Shorter announced his transfer to Florida. Shorter entered the transfer portal in November after failing to make an impact in his first two seasons as a Nittany Lion. He finishes his stint at Penn State with 15 catches for 157 yards.

Gator fans will be hoping Shorter can recapture the form that had him ranked as the top receiver in the 2018 recruiting class prior to his commitment to Penn State. At 6-foot-4 and 235 pounds, he certainly has the build to be elite.

Shorter will see an opportunity for substantial playing time under head coach Dan Mullen next season, with Cleveland, Jefferson, Freddie Swain and Josh Hammond all vacating spots on the wide receiver depth chart.

I'm a senior journalism student at Florida. I love sports, and I love covering sports. I'm one of the beat writers for the Gator soccer team right now, and if you follow me on Twitter @johnmiceli13 you'll never miss a soccer update
Previous L.A Reacts to Loss of Legend
Next Former Gator Pete Alonso Talks Mets