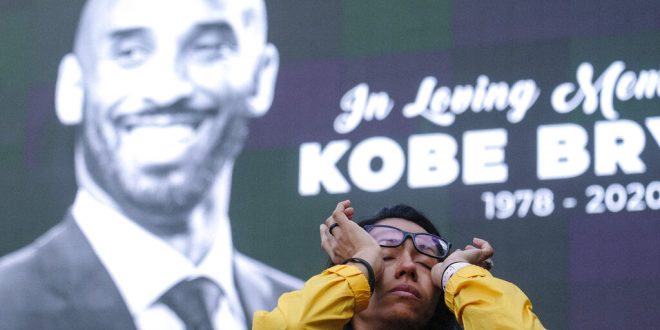 Nicole Mascarenhas, wipes her eyes in front of a screen with the late Kobe Bryant at a memorial for Kobe Bryant near Staples Center Monday, Jan. 27, 2020, in Los Angeles. Bryant, the 18-time NBA All-Star who won five championships and became one of the greatest basketball players of his generation during a 20-year career with the Los Angeles Lakers, died in a helicopter crash Sunday. (AP Photo/Ringo H.W. Chiu)

On Sunday, former NBA standout Kobe Bryant was traveling via helicopter over Calabasas, California when flames broke out in the aircraft. He was one of nine victims in a crash that also claimed the life of his daughter, Gianna, 13.

The Face of A Franchise, Heart of A City

The reaction was swift, and in many cases, uniform: Shock. Heartbroken. Devastation. Perhaps the city of Los Angeles, where Bryant spent the entirety of his 20 year NBA career, felt his passing the hardest. As a guard with the Lakers, he racked up 33,570 points and helped bring five NBA championships home to the City of Angels. Beyond his accomplishments on the court, Bryant was active in the L.A. community. He granted over 250 wishes for terminally ill children through the Make-A-Wish foundation and held an annual basketball clinic for kids. In 2012, he took hot chocolate to families benefiting from the Lakers holiday Adopt-A-Family program.

Jerry West, the former Laker player and organization executive who traded for Bryant on draft night in 1996, was heartbroken by the news.

Magic Johnson also shared his thoughts on the star’s death, saying he believed Bryant to be “invincible”:

Many beyond the Laker organization felt Bryant’s loss. Fans gathered outside of the Staples Center to pay tribute to him, bringing wreaths, flowers and other sentiments of the beloved player. Chants of “Thank You Kobe” broke out outside of the arena.

The fans, the gifts, and the chant all signify one thing: Bryant was loved in the city of L.A. How much so? After one media member tried to buy flowers in his honor, the florist gave them to him for free:

Bought flowers to bring to staples center. When the florist saw that I wanted purple and yellow she asked, “for Kobe?” I nodded. When she finished I asked what I owed her. she shook her head, handed me the flowers and said “it’s LA”. I almost cried. LAs love for Kobe is powerful