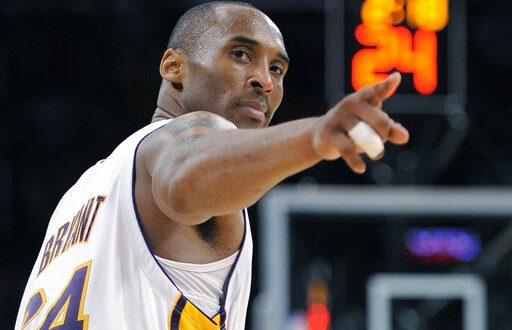 FILE - In this June 7, 2009 file photo Los Angeles Lakers guard Kobe Bryant (24) points to a player behind him after making a basket in the closing seconds against the Orlando Magic in Game 2 of the NBA basketball finals in Los Angeles. Bryant, the 18-time NBA All-Star who won five championships and became one of the greatest basketball players of his generation during a 20-year career with the Los Angeles Lakers, died in a helicopter crash Sunday, Jan. 26, 2020. He was 41. (AP Photo/Mark J. Terrill, file)

Athletes and fans across the world continue to mourn the loss of one of the NBA’s greatest players, Kobe Bryant. The news of the NBA legend’s death left the world in shock when reports were confirmed Sunday afternoon.

The former Los Angeles Laker died in a helicopter crash on Sunday morning in Calabasas, California. Bryant and his 13-year-old daughter Gianna were among nine passengers on board the helicopter.

The impact of the NBA star’s death was felt all across the world as athletes, fans and reporters took their heavy hearts to social media.

Athlete Reactions to the Loss of Bryant

The news of Bryant’s death sparked grief amongst athletes from multiple sports. Reactions from professional athletes came pouring in on social media and during post-game interviews.

I had the chance to watch Kobe Bryant practice at UCSD back in 2004 and then meet him in 2006 in New Orleans. His determination, work ethic, and competitive drive were unmatched. He inspired so many and his legacy… https://t.co/8qJCKwbVwY

The quarterback highlighted Bryant’s greatness as a competitor during an interview at the Pro Bowl.

The Pro Bowl offensive MVP Lamar Jackson commented on the way that Bryant impacted the game of basketball.

Furthermore, golfer Tiger Woods learned of Bryant’s passing after his final round of the 2020 Farmers Insurance Open.

Woods, a Laker fan and friend of Bryant’s, expressed his shock in an interview minutes after learning of Bryant’s death.

During the interview, Woods praised Bryant’s competitive nature and his ability to play both sides of the court.

Athletes across the NBA, NFL and professional tennis began paying tribute to Bryant.

In NBA, Atlanta Hawks point guard Trae Young was one of the first to pay tribute to his idol. Young wore Bryant’s No. 8 on his jersey in the Hawks’ game against the Washington Wizards.

In addition, NFL players at the Pro Bowl in Orlando paid a tribute to Bryant on Sunday afternoon.

At the Australian Open, tennis player Nick Kyrgios wore Bryant’s No. 8 to show his respect before his match.

Bryant spent the entirety of his 20-year career in Los Angeles where he won five championships with the Lakers. An 18x All-Star and 2008 MVP, Bryant is regarded as one of the most accomplished athletes in NBA history.