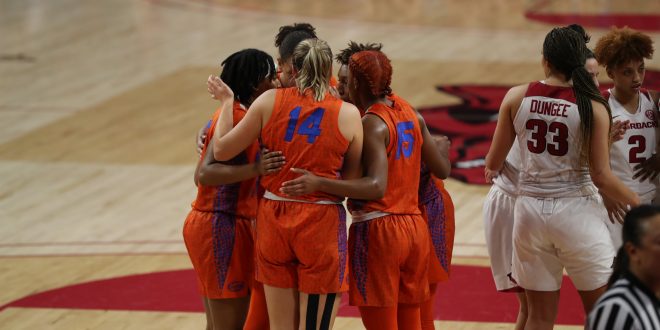 The Gator women’s basketball team drops another conference game against a ranked team, this time falling at number 21 Arkansas 79-57 at the Bud Walton Arena. This is the fourth game in a row in which the Gators faced a ranked SEC opponent. The Gators are now 11-9, and 2-5 in conference play and are now 28-11 all-time against the Razorbacks.

The Gators have now played against five ranked SEC opponents in their seven conference games. Their seven games against AP Top 25 opponents are the highest total, tied with South Carolina in the SEC.

Despite the loss, the Gators were able to outrebound the Razorbacks, 34-31. This is the 12th time Florida has outrebounded their opponent this season. They also held the edge in second-chance points, earning 12 compared to Arkansas’ two.

Florida also held the Razorbacks below their scoring average. This is the 14th time the Gators have accomplished this in their 2019-2020 season.  The Gators lead the SEC in points scored and minutes played by underclassmen. In this match, the crowd saw Florida’s underclassmen score 43 of their 57 points in the game.

Florida head coach Cam Newbauer recognizes that despite the loss, his team has been putting a good fight this season and will keep on improving.

“To be down 15 two times in this game and come back to cut it to five shows how together this team is and I’m proud of the grit we showed. ” Newbauer said. “We just have to believe, keep fighting and keep going. It’s hard to do when you lose, but you have to keep your eyes on the silver lining and the growth process.”

Next up, the Gators will be back home on Thursday when they host the LSU Tigers. Game time is set for 6 pm.

The Gators led the Razorbacks 11-10 in the first media timeout, but Arkansas used this break wisely, as they came back with a 16-2 scoring run. Florida had control of the beginning of the second quarter but Arkansas pushed once more, making 11 out of their 16 shots. The Razorbacks were also able to score four 3 point baskets in this quarter.

After a slow start in the second quarter, the Gators were able to pick up the pace making 10 unanswered points, cutting Arkansas’ lead to five. Florida outscored the Razorbacks 12-8 in this frame, limiting their opponent to 18.8 percent shooting.

The Razorbacks came back determined to the court after halftime, stretching their lead back to 15. They led the Gators by double digits until there were a little over three minutes left when freshman Lavender Briggs knocked down two technical free throws, cutting their lead to eight. After a three-pointer by sophomore Ariel Johnson, the Gators were back to a five-point difference.

Briggs scored in the double digits for the 17th time this season for Florida, leading her team with 17 points and she was one rebound short of getting a double-double. Junior point guard Kiki Smith joined Briggs in double figures with 10 points.

Sophomore guard Kristina Moore scored eight points and tied her career-high with eight rebounds. She scored more than she had scored in her previous eight games.

The Gators were able to hold Arkansas’ Chelsea Dungee, an All-SEC talent player to only seven points, a season-low. Dungee averages 19.6 points per game.

Camila is a senior at the University of Florida, who served as a beat writer for the women's basketball team from 2019 until the 2021 season. She was also a beat writer for the Gators football team during the 2020 season. Camila is also WUFT's news director as well as a sports reporter/anchor.
@CamilaMaffuz
Previous Newberry Boy’s Hoops Takes On Buchholz
Next Professional Athletes Pay Tribute to the Late Kobe Bryant