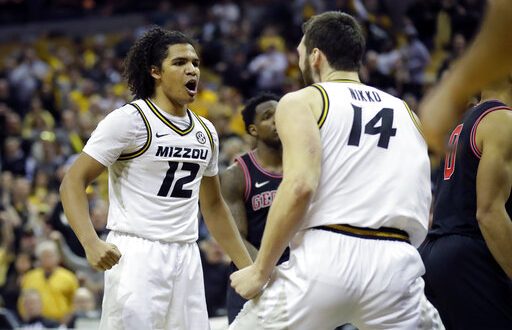 Last night, two bottom dwellers took the court in SEC Men’s Basketball. Both the Bulldogs and the Tigers entered the game at 1-5 in SEC play. Despite college basketball sensation Anthony Edwards’ best efforts, the Georgia Bulldogs couldn’t get it done down the stretch as Missouri came back from down 20 to win 72-69. The Georgia Bulldogs are 1-6 over their last seven games. Their last win was on Jan. 15 against Tennessee.

Bulldogs fall off in the second half

Prior to the game, Missouri was a 4-point favorite to win. At halftime, however, it was Georgia’s game to lose – which they did.

Georgia led 42-30 at the half and continued to open the margin up to 20 points with 13:33 left in the game. Missouri was able to climb their way back on the hands of Javon Pickett and Xavier Pinson as those two led the Tigers on a 14-2 run over the next six minutes.

Missouri comes back from being down 20 in the second half to beat Georgia. Pinson with 16 second half points; he was the hero tonight!

The Tigers gained the lead with two minutes left off of Reed Nikko’s free throws; their first lead since halfway through the first half. Anthony Edwards had a chance to send the game to overtime with a deep three, but he was unable to sink the shot.

Despite Missouri having 8,451 people in attendance, which is more than their average of 7,721, Anthony Edwards felt no pressure from the Missouri fans. Edwards scored 23 points and 10 rebounds to show for it. When asked about his thoughts on the crowd’s influence, Edwards said he barely noticed them. Reed Nikko must have gotten some encouragement from the crowd as he scored a career-high 13 points and a potentially game-winning block on future top-five NBA draft pick Anthony Edwards.

Georgia guard Anthony Edwards on if #Mizzou’s home crowd influenced the Bulldogs: “That’s probably the smallest crowd we’ve ever played in, so I don’t think it really effected me. … I don’t think the crowd played a role.”

Georgia now sits at 1-6 in the conference and Missouri is 2-5. Next for the Tigers, they play at South Carolina on Saturday who are 3-3 in SEC play. The Bulldogs will play at home against Texas A&M. A big matchup for Georgia will be A&M’s Josh Nebo who has a 72.1% FG percentage which is second in the entire nation.

Jensen Young is a journalism student at the University of Florida. He works as a sports writer for WRUF.com and is the voice of trendings on Wednesday mornings on the WRUF radio station.
@Jensen_Young9
Previous Exciting win for Auburn before taking on Kentucky
Next No. 13 Kentucky looks to extend Vanderbilt’s historic skid