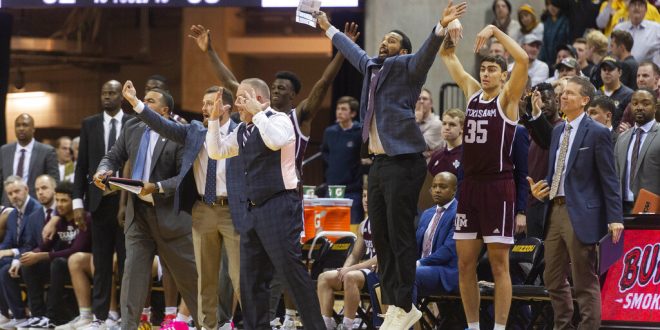 The Texas A&M bench celebrates a basket in the final seconds of the second half of an NCAA college basketball game against Missouri Tuesday, Jan. 21, 2020, in Columbia, Mo. Texas A&M won the game 66-64. (AP Photo/L.G. Patterson)

In a battle of SEC basketball teams looking to make a late season turn-around, Texas A&M left Knoxville with a 63-58 win on Tuesday night.

Heading to Tennessee with a 9-9 record and 3-3 in the SEC, the Aggies were danger of falling to the No.10 in the conference. Instead, head coach Buzz Williams and his team handed the Volunteers their third conference loss.

Senior Wendell Mitchell played a huge part in this win. The 6’3″ guard accounted for 23 points and was a perfect 9-9 from the line. He also hit four from beyond the arc. Even with Mitchell’s strong performance, Tennessee made it close at the end.

Tennessee forward John Fulkerson had a strong outing in this game. The redshirt junior used his 6’9″ frame to his advantage in the paint.

He put up 15 points and shot an impressive 77.8%. Unfortunately for Fulkerson, his performance did not result in a win.

After falling behind in the second half, the Vols fought back to tie it 53-53 with under 50 seconds to go. However, a 3-pointer from Mitchell put a dagger in their comeback hopes.

This loss was significant for Tennessee. They now sit in seventh place in the SEC after a chance to solidify a spot in the top-five. Tennessee falling to Texas A&M means that there are four teams with 4-3 conference records, potentially five if Alabama loses to LSU on Wednesday.

Next up: a pair of SEC matchups

On Feb. 1, Tennessee and Texas A&M will both take on conference rivals.

The Aggies will have a great opportunity to build on this win with a game in Georgia against the Bulldogs. Georgia is in 12th place in the SEC and only has one conference win.

While the Aggies look to keep their momentum, the Vols have a chance to redeem themselves against fifth place Mississippi State.

After a chaotic week of unexpected losses, the No. 18 Tennessee Volunteers will look to …