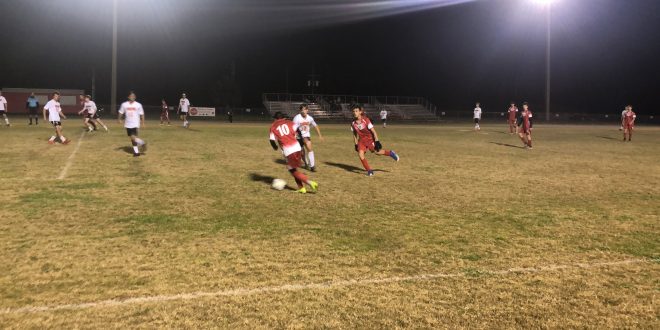 An evening that began with celebration ended with celebration. The Williston boy’s soccer team delivered on Senior Night, dominating the Trenton Tigers 8-2. With the win, Williston builds ever important momentum headed into the district tournament and sends six seniors out on a high note.

Most of the damage in this one was done in the first half. Right out of the gate it was obvious that the Red Devils were the superior team, possessing the ball for nearly the entire half. Senior Matthew Carlson got the scoring started, followed by two goals from midfielder Victor Gutierrez. The first of the two by Gutierrez was the highlight of the night by far.

The scoring spree continued when eighth grade striker Jace Pavao used his head for the goal to make it 4-0, Williston.

Just like that it’s 4-0 Williston as eighth grader Jace Pavao uses his head for the score @ESPNGainesville pic.twitter.com/uzrRBQ8C3m

It quickly became 5-0 after Gabrial Hughes finished off a series of three shots on goal by finally knocking it in the net. Trenton scored late in the half to at least make it look somewhat competitive, but the damage was done. The Red Devils took a 5-1 lead into half and it didn’t feel that close. Williston had 15 shots on goal at minimum, while Trenton possessed the ball for what felt like 15 seconds. It was utter domination from the opening whistle.

The second half slowed down quite a bit. The Red Devils brought in many of their reserves, including fan favorite Javier Garcia. The senior defender was down on the offensive end in the second half and repeatedly had his number called, hoping for a goal to cap off his career. Starting goalkeeper Austin Wolfe was also playing as a striker in the half, looking to end his high school career with a goal as well. Unfortunately, neither of them had their moment in the spotlight, but another senior defender Sean Perkins did score in the closing minutes. Before Perkins’ goal, Trenton actually scored about midway through the second half to cut the gap to 5-2. The Tigers wouldn’t score again. Williston added three additional goals including Perkins’ to bring the final score to 8-2.

The Red Devils finish the regular season with a record of 11-2-3. As for Trenton, they limp towards the finish line with a 3-12 record with just one game left on the schedule. Williston ended the regular season on a tear. They did not lose in nine straight games, their last loss coming on December 13 of 2019. Williston is figuring it out at the right time, as the district playoffs are up next. If they can continue their scorching hot play, the Red Devils could make a deep run in the postseason.